Invented: WPI Patents Past and Present 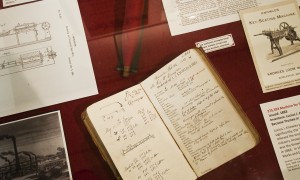 An automatic sprinkler for putting out fires. A ball valve. A mechanical microscope stage. A toy saxophone that blows bubbles.

These are just a few of the wide array of WPI-affiliated patents, a collection of which are on view now at Gordon Library. The exhibition, “Invented: WPI Patents Past and Present,” celebrates the full range of innovation by WPI’s faculty, alumni, students and founders, from early industrial technology to modern biotech and advances in electrical and chemical engineering. There have even been new methods of amusement, like that saxophone patented in 1990 by David Moomaw ‘73.

“We’re hoping that by highlighting a very few of the many patents people from WPI have, it will spark an interest in the history of innovation at WPI,” says Jackie Mushinsky, the library’s collections management coordinator, who helped assemble the exhibition.

It’s hard to say how many patents have been granted to WPI alumni and faculty, but Mushinsky says there are probably thousands. The library has a file drawer of patents sent in by alumni, and many early patents are part of the historical collections, says WPI Archivist Margaret Anderson, who also worked on the exhibition. But library staff members hope to build a digital repository that will make them more accessible. 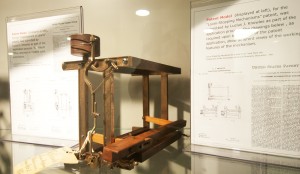 “We are hoping the exhibition will generate more interest and that people will send us patents,” Anderson says.

While the exhibition includes only a small fraction of WPI-related patents, the documents, models, photos, and objects on display represent many fields of inquiry, dating all the way back to the early years of the Institute. Ichabod Washburn, one of WPI’s founders, patented a method of hardening and tempering steel wire in 1861. He funded the construction of WPI’s Washburn Shops, and in 1878 the shops’ first superintendent, Milton Higgins, patented an improvement in hydraulic elevators.

In the 20th and 21st centuries, students, alumni, and faculty continued WPI’s tradition of innovation, branching out into new fields. Dean Kamen invented the AutoSyringe as an undergraduate physics major in the 1970s, earning a patent in 1975 for the wearable medication pump. An early version of the device is on view at the library, along with a radio apparatus, patented in 1928 by A. Atwater Kent, who was a student in the 1890s.

In 1995, WPI biology professor Pamela Weathers patented a process for extracting chemicals from plants. Today, she is building on that research to develop an anti-malarial drug. Just last year, a WPI team led by mechanical engineering professor Allen Hoffman was granted a patent for a powered orthotic device that will help people with weak or disabled arms to regain their range of motion. 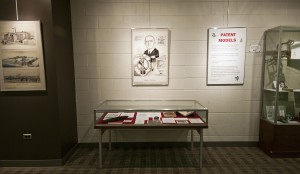 “Realizing how much creative genius we have had here and continue to have—maybe it’s kind of inspiring for students, to see what they might do,” says Anderson. “We have the theory and the practice—this might help them appreciate the practice side.”

The Exhibition was conceived and much of the research conducted by Christine Drew, the library’s associate director of research and instruction services, before she died in February at the age of 42.

Located in the Gladwin Gallery on the ground floor of the library, the exhibit is open through October 31. There will be a reception April 4 from 4:30 to 6 p.m.