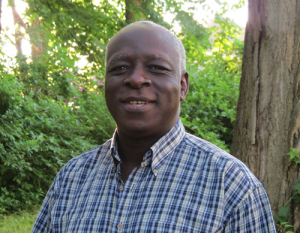 Edward Oluokun’s artwork tells a story that spans continents, generations, and even the incredible advancement of technology. Oluokun’s passion for music began as a child in Africa and his oil-on-canvas paintings show the power of the instruments people use to forge community bonds worldwide.

On August 29, an exhibit of Oluokun’s work opens in Gordon Library’s Cafe 1970 Gallery and remains in place until November 19. An artist’s reception will be held in September (TBA).

His inspiration, he says, is the vast collection of instruments he played as a child, especially his beloved percussion pieces, and how they are used in his culture. Developing a passion first for the music and then for the art, gave Oluokun a feel for  how to play the instruments and how they made listeners feel. And he wants people to know the roots of the instruments.

“As a percussionist myself,” he says, “I’ve been to so many music stores, and I wondered if the people would know the roots of the musical instruments. Would they know who originated them?” And although Oluokun is proud the instruments began in his home country, he tells the stories to show the link in cultures. “This is not to be boastful, because the world is becoming a global village,” says Oluokun. “You can get all this online, but it may not be as authentic as what I am offering you.” 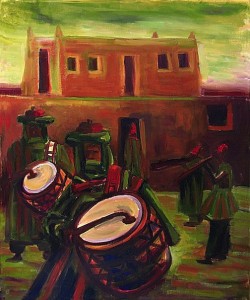 Jackie Mushinsky, Gordon Library’s collections management coordinator, says she first met Oluokun through family and then realized his art naturally reflected WPI’s mission. “We try to connect [the exhibits] with the academics or studies here on campus,” she says. As a local artist, Oluokun has a community link, but his international theme and vivid colors of the art offers diversity of interests as well, she says. “Oluokun’s writings that accompany each piece also depict how music and art are linked.”

As a child in Ogbomosa, Nigeria, Oloukun’s percussion skills were so respected he was invited to play in an adult band. “I developed a keen interest in cultural music and instruments,” he says. “Early on, I knew I was a good percussionist, and I knew I was benefiting the community with the music.” When he turned to fine arts as a teen, the instruments he knew so well and the stories they told became his muse.

After earning a fine arts degree at the Polytechnic, Ibadan, Oluokun worked as an artist until his path took an unexpected turn. “Somewhere along the line, I got called to preach by God,” he says. He eventually earned his master’s degree in divinity at the Mid-America Baptist Theological Seminary in Memphis and went on to earn a master’s in English from the University of Memphis.

In each locale, Oluokun has immersed himself in the local musical community, and wants to tell the stories of the instruments – how they are made, how they are used in African culture, and how music itself is used in his native culture. “I try to bring people what I know to the best of my ability,” he says. 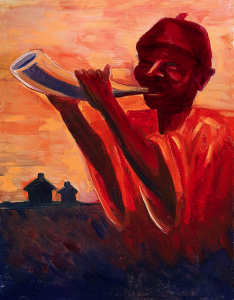 ​Oluokun is thankful to WPI for the opportunity to exhibit his work. “In my own way, I tell my story and pass on a legacy to those who are here,” he says. Whether the attendees are from Africa and find a personal connection to the art or they are people who may never have a chance to set foot in Africa, Oluokun knows he can reach them through his paintings and stories of how musical traditions link all cultures.

“I want to be out there as a resource and to be a very good ambassador of my country,” Oluokun says.