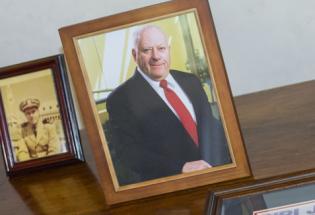 The Presiding Genius of the Place chronicles the life of William R. Grogan, one of the founders of the university's groundbreaking project-based curriculum 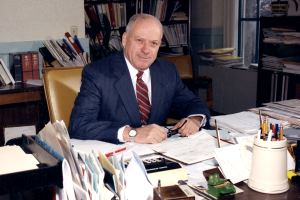 From his busy Boynton Hall office at WPI,
William R. Grogan oversaw the
implementation of the WPI Plan.

Seventy years after he graduated from Worcester Polytechnic Institute (WPI)—the university where he went on to work and which he, ultimately, transformed—William R. Grogan's life and his impact on higher education are explored in a new biography. The Presiding Genius of the Place: How Bill Grogan Transformed Lives, Organizations, and Higher Education, by Allison Chisolm, chronicles Grogan's involvement in creating the WPI Plan, the university's pioneering project-based undergraduate curriculum, and offers lessons for those seeking to effect lasting change in higher education and other arenas.

Grogan was a masterful professor of electrical engineering, an award-winning engineer, and an inventor. His remarkable leadership skills, his insights into how people think and make decisions, and his uncanny ability to bring people with diverse backgrounds and strong opinions together to support a common goal were the cornerstones of his success. He helped create and then led the implementation of the WPI Plan, a revolutionary change in the Institute's approach to undergraduate education that transformed the school by replacing a traditional, rigid, highly proscribed engineering and science curriculum with a groundbreaking project-based program that put much of the responsibility for learning in the hands of students. 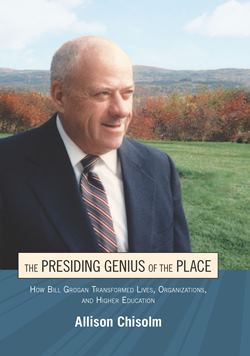 Published by WPI as part of the celebration of its sesquicentennial, the 234-page illustrated hardbound book covers Grogan's 90-plus years—from his early life in Lee, Mass.; to his decision to enroll in the Navy's V-12 officer training program at WPI (leading to tours of active Navy duty during World War II and the Korean War); to his more than 70 years of involvement with his fraternity, Phi Kappa Theta, as a brother, faculty advisor, and national leader. It also reveals his ability to manage people and bring about positive change in organizations as diverse as the Navy's weapons development program, Bell Labs, and the Catholic Diocese of Worcester, where he helped lead a broad reform Catholic education programs. Nowhere was his impact felt more deeply than at WPI.

Even before the Plan was approved by the WPI faculty in the spring of 1970, Grogan had been appointed the Institute's first dean of undergraduate studies, which gave him responsibility for leading the program's implementation. Since virtually every aspect of the curriculum (degree requirements, grading system, academic schedule) was changing, and because the transition involved an all-or-nothing gamble (every undergraduate was to be studying under the Plan within just a few years), putting the Plan in place required the coordinated efforts of hundreds of faculty and staff members and students, all working under Grogan's direction. As one indication of the scale of this radical overhaul, which involved inventing and continually fine-tuning an untested approach to education, the central implementation committee met weekly for 15 years.

As the orchestrator of the Plan's implementation, Grogan also found himself thrust into the role of its chief defender and protector. In part, that meant navigating a sometimes contentious relationship with the Accreditation Board for Engineering and Technology (ABET), which accredits technological higher education programs nationwide. In the end, Grogan's optimism, his inspiring leadership, and his persistence in helping reinvigorate and at times reinvent the Plan paid off. In 1996 ABET released new accreditation criteria that focused on student outcomes (causing Grogan to write, "…strange as it seems, the accreditation system looks more like WPI's degree requirements now.").

In 2016 the National Academy of Engineering awarded WPI its Bernard M. Gordon Prize for Innovation in Engineering and Technology Education, recognizing the university for its "project-based engineering curriculum developing leadership, innovative problem solving, interdisciplinary collaboration, and global competencies." Grogan, who passed away in 2015, was lauded at the award ceremony as the chief architect who laid the foundation for this international recognition. That sentiment echoed thoughts expressed nearly three decades earlier by Harvard sociologist David Riesman, who headed a National Science Foundation panel that evaluated the Plan. "The fact that the Plan not only survives," Riesman wrote, "but is stronger than ever is Bill Grogan's doing."

After his retirement, Grogan set out to write a book that would distill some of the lessons he felt WPI's experience with the Plan offered to others seeking to bring about significant change in higher education. While the book remained unfinished upon Grogan's death, Chisolm had access to his manuscripts and notes, as well as transcripts of hours of interviews he undertook as part of the book's development. She combined these personal recollections with archival research and interviews with nearly four dozen of Grogan's colleagues, friends, and family members. “The biggest challenge was to weave one narrative out of so many different stories,” she said. “A lot of details needed to be intertwined to make sense of so many loose strands, but I was fortunate to have so many strands to work with.”The book achieves Grogan's original goal, noted James Demetry, professor emeritus of electrical and computer engineering at WPI and former director of its Division of Interdisciplinary Affairs. "The Presiding Genius of the Place should be read by anyone hoping to be a leader in or exploring the contemporary history of educational development, advancement, and reform," he wrote in a review of the book. "It's a fascinating account of how the many ingredients of effective leadership develop in the early stages of a career and then come together in a series of challenges and opportunities to yield ever higher skills and achievements over time."