Both sides waited in anticipation, each just as excited as the other. Craning necks, nervous smiles, shuffling feet.

Finally, it came time for the unveiling; the cluster of students stepped aside to reveal brightly colored, freshly painted, newly assembled playhouses. Across from them, the children standing with their parents gasped, smiled, and then did what any kid would when presented with such a treasure: Ran over to explore.

“By the end, everyone was ridiculously excited to get to reveal all their hard work to the families.” —Jake Rogers ’16

The event, held Saturday, Feb. 13, was a joint effort of several WPI fraternities, numerous sponsors, and Habitat for Humanity Metrowest/Greater Worcester. Dozens of WPI students spent the better portion of the day building and painting playhouse kits that were then presented and donated to the young children of local veterans. The parent recipients included Chris and Emily Olivo of Southbridge, Brendan and Amy Conlin of Chelmsford, and James and Devon Pallotta of Templeton. 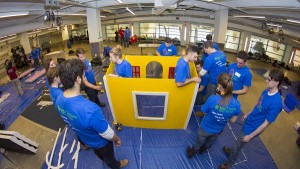 The effort was part of Habitat for Humanity’s Project Playhouse initiative, which serves as both a build and a fundraiser benefitting veterans. As part of the WPI event, which was held in the robotics pit in the sports and recreation center, playhouses were built for three local families, and at least $2,250 (or $750 per house) was raised to help with Habitat’s veteran’s critical home repair program.

“It’s a heartfelt and heart-warming event for everyone involved,” says Seth Jajliardo, community outreach manager for Habitat for Humanity MetroWest/Greater Worcester, which began the initiative in 2014, following the lead of Habitat affiliates in California.

Habitat of MetroWest/Greater Worcester partnered with the national organization Blue Star Mothers of America, Inc., to help identify local veterans with children between ages 3 and 10, Jajliardo explained, and also enlisted students from Worcester Technical High School, who cut and primed playhouse kits that are then assembled by volunteers of sponsoring companies or organizations during an all-day event.

Since launching the effort two years ago, the local Habitat has raised around $80,000 to help with repairs, such as roofing, siding replacement, or installation of wheelchair ramps, at the homes of local veterans. As Jajliardo explained, the organization has done five such critical home repairs over the past six months, and has a target of 10 per year.

Genzyme, UNUM, and several other local companies have sponsored builds over the past two years; 25 playhouses were built in 2015, according to Jajliardo, and the organization is on track to do 40 this year. Each mini house is custom designed based on the recipient child’s interests, with themes ranging from Barbie to the Bruins. 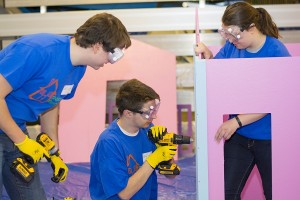 Ultimately, it’s an event that benefits everyone, Jajliardo points out. “It’s really a great team-building exercise, and we’re serving our veterans,” he says.

According to Rogers, students spent about four weeks organizing the event and fundraising for it. The playhouses were sponsored by several campus fraternities, including Alpha Phi Omega, Zeta Psi, Alpha Chi Rho, and Sigma Alpha Epsilon. During the day of the event, more than 70 students were involved in assembling, shingling, painting, and decorating them.

“It was definitely fun the entire time. Everyone was getting their hands dirty,” says Rogers, a biology and biotechnology major. “As the day went on, the energy increased, as people saw the houses coming together. By the end, everyone was ridiculously excited to get to reveal all their hard work to the families.”

Both he and Jajliardo agreed that it was a great partnership, and one that both WPI and Habitat for Humanity would like to establish as a regular tradition.

“We all worked really hard to make sure that this event went well for the families,” says Rogers. “Everyone who participated would love to get the chance to do it again.”