Puchovsky has long been involved in the professional society, first as a graduate student at WPI in the late 1980s and then in the local chapter. (He is a past president of the New England chapter.) He then moved up the ranks to the national chapter and the board of directors. He is a fellow of the organization and was awarded its Hats Off Award in 2015.

During his term, Puchovsky “would like to advance the profession we serve as it can make a great impact on society at a global level,” he says. “The risk of fire is always great. We need to make people aware that there are fire protection engineers. We are trained and licensed. My role is to get more people to recognize what we do and to get more young people aware of the profession. FPE is exceptional in the job market now.” 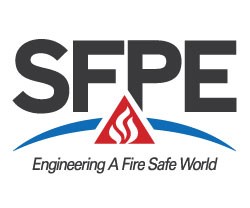 Puchovsky is a 1988 WPI graduate in mechanical engineering with a master’s in fire protection engineering (1991). His particular interest, as he states on his WPI webpage, is in “the design and evaluation of active and passive fire protection systems, including means of occupant egress.”

He began his career as a consulting engineer in the corporate world and then moved to the insurance industry, where he assessed risks for their underwriting interests with regard to fire and life safety, evaluating buildings in terms of fire risk, and recommended systems to be put in place for greater safety.

Until he became a professor of practice at WPI in 2008, however, the heart of his career was spent at the National Fire Protection Association (NFPA), based in Quincy.

The NFPA is a nonprofit that sets codes and standards in terms of fire and electrical safety that are then used by local, state, and federal government offices to establish laws for building construction.

In that capacity, he oversaw technical projects that focused on “life safety code, fire test standards, building construction, means of egress, fire pumps, all kinds of stuff,” he says. “I wrote books and articles, and investigated fires.”

Essentially, “I was the face of the NFPA when it came to the entire standards process.”

Puchovsky had enjoyed teaching about the criteria for codes and standards during his early years at the NFPA and maintained close ties with WPI after he finished graduate school.

“Much of FPE on a global level relies on NFHP codes and standards,” he continues. “I would be brought in to classes or projects to give that perspective.”

When the department decided to hire a professor of practice, someone active out in the field who could teach, it was a logical next step for Puchovsky.

He is now also the director of corporate & professional education at WPI.

In addition to teaching numerous undergraduate and graduate courses in the FPE Department, “I travel the world,” he says. “As a professor of practice, part of what I’m supposed to do is stay relevant in the field. I go all over the place on various projects, and I talk about WPI where I can. I talk about the Fire Protection Engineering program and how wonderful it is.”

The desire to promote and advance the profession will be the core of his presidential term at the SFPE.

“It’s a relatively young and unknown field,” he says. “There are only three schools in the U.S. and a handful worldwide that will give you a degree in FPE. It’s a very important field but no one knows about it.”

Indeed, those companies “hiring our graduates need more of them,” he says. The few schools with programs cannot supply the demand. In addition, the number of fire protection engineers with master’s degrees and doctorates need to increase.

Growing the numbers in the field, as well as spreading the word about its importance, means that companies or businesses will hire trained and licensed experts, rather than non-fire protection engineers who they then “train to do what they think they need.”

He looks forward to the next year.

“It is time for me to give back,” he says. “The profession has been very good to me, and this is an opportunity for me to do my part to help grow it and ultimately make the world a better place.”