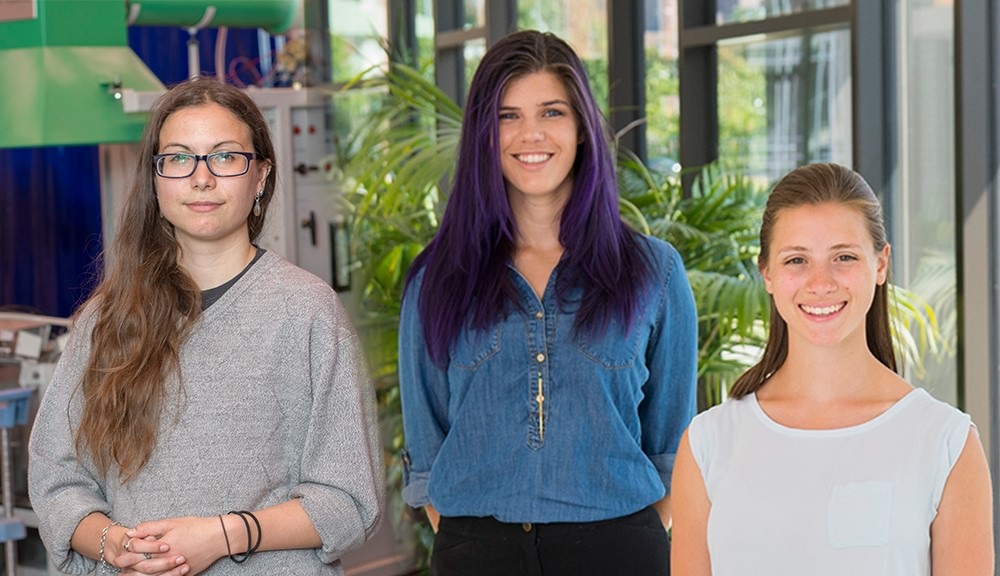 The women bring different backgrounds and are following diverse academic paths, but all will elevate the research at WPI with the work they plan to do here.

The competitive Presidential Fellows process is open to U.S. citizens from underrepresented groups who are working in a science, technology, engineering, math, or business discipline. The award includes a year of tuition, a $31,200 stipend, and opportunities for professional development and travel to conferences.

Terri Camesano, dean of graduate studies and a professor of chemical engineering, says the award offers a certain freedom doctoral students want. “One of the main advantages of having a fellowship is that the student gets complete flexibility in carving out their research path,” she says. “The fellowship is open to any research area, so the student can define the best project in consultation with their advisor.”

Doctoral students are often funded through grants that, although valuable, are generally tied to a specific research project and narrows the potential to explore an unexpected path, say the fellows. While this is a one-year fellowship, Camesano says she’s confident the students will secure external fellowships or secure funding as a teaching or research assistant to continue their studies here when the year is over.

The Daily Herd recently spoke with the Presidential Fellows to hear what brought them to WPI and what their plans are while they are here.

For Veronica Kimmerly, deciding to come to WPI wasn’t a tough choice. As one of only a handful of fire protection engineering PhD programs nationwide, she had WPI in her sights. But the program’s distinctive autonomous status was the deciding factor. A degree granted in FPE and not as a subset of mechanical engineering, for instance, means she can delve deeply and right away into the areas of fire protection that most interest her. Being a Presidential Fellowship recipient, she says, gives her the freedom to fully devote time to research—a luxury many PhD students don’t have.

Kimmerly earned her master’s from the Erasmus Mundus International Master’s in Fire Safety program, a partnership that includes Ghent University (Belgium), Lund University (Sweden), and the University of Edinburgh (UK). With concurrent BS degrees in math and chemical engineering from Virginia Tech, the international program gave her experience and established an international professional network that she will build upon while at WPI.

Her FPE interest started with a small accidental fire in a DuPont lab where she worked as a co-op student. Intrigued by the response team’s reaction to the potential for many different materials igniting and releasing fumes, she asked questions. Still curious, she checked out a book on fire safety. Realizing the potential for almost unlimited opportunity for career growth and life-long learning, Kimmerly found her passion. “Because this is a specialized field and it’s so young, almost any of your work will be cutting-edge,” she says.

Her particular interest is the fundamental modeling of pit fires, and she plans to recreate Zukoski’s famous set of experiments with correlation on entrainment of fire plumes. The goal of improving fire safety, fire response methods, and preventing fires is far-reaching and exciting. Kimmerly plans to work in industry for practical experience before becoming a professor. “We’re never going to stop having fires,” she says, noting that researchers are driven to reduce the impact of fires and to prevent fires whenever possible. “There’s so much opportunity in this field.”

Dayna Mercadante says she realized WPI was the perfect place to embark on her PhD studies in bioinformatics and computational biology when she saw that interdisciplinary collaboration was real here. With BS degrees in math and biology from Franklin Pierce College, she wanted to combine the two fields in an advanced degree, but didn’t know how to do that. Other schools offered math degrees, but with no clear path between math and biology, she wasn’t sure how she would bring it all together. Then she remembered a high school friend mentioning his WPI professor who was a mathematical biologist. It all clicked.

Now that very same mathematical biologist is Mercadante’s advisor—mathematical sciences professor Sarah Olson. “This is the best possible situation to come here,” she says. Before coming to WPI, she competed an undergraduate research experience at Missouri State University and then spent two years working as a research associate at Cystic Fibrosis Foundation Therapeutics.

Mercadante hopes to use her education to advance potentially life-saving predictions as they relate to biology. For example, she says, using just three different differential equations to track the spread of a water-borne

disease, scientists and mathematicians can model how the interactions between those groups can predict the disease’s potential extent. Using applied math, she can potentially predict how interactions between vulnerable population members, infected people, and polluted water can impact outcomes. With that information, she can make a model to help predict how a water-borne disease spreads and what can slow it down.

Eventually, she would like to model the paths of her mentors and become a professor to inspire students to take the direction that’s best for them.

Alexandra Valiton is no stranger to hearing about WPI, Gompei, and engineers. Both her parents earned WPI degrees, but Valiton didn’t initially connect her parents’ alma mater with her own academic path. It wasn’t until a friend in her Austin, Texas, hometown mentioned his robotics engineering major at WPI and WPI’s pioneering robotics graduate degree programs that she began looking at WPI in a new light. “There is so much technology that is about to explode out of robotics in the next 10 years,” she says. “WPI is one of the only schools with a PhD in robotics. It’s not a subset of ECE.”

Valiton, who spent several years working in manufacturing automation in New York City after earning her BS in electrical engineering at the University of Oklahoma in 2012, knew robotics was her best fit. But other robotics PhD programs lacked WPI’s specialized focus, she says. Valiton says the Presidential Fellowship reduced the pressure to focus immediately on one topic as she pursues her MS studies and then PhD work. “This gives me the freedom to explore a larger group of topics without a specific grant,” she says. “I can talk to the professors and visit the labs. There’s no pressure to go to the lab the first day. I can figure out what I love about robotics.”

And there’s much to love, she says. Whether it is autonomous vehicles, assistive technology, or figuring out how to bridge the gap between a human thought process and robotic processes, she says it is all captivating and advancing at lightning speed.

With a focus on a future career in industry where she can contribute to the field, Valiton says the work as an older grad student takes on a new meaning and having funding as a Presidential Fellow offers an advantage. “I am here for 100 percent personal choice,” she says. ”Every class not only applies to what I am learning, but to what I want to do. Now I can start working toward a career and a life work that I am passionate about.”