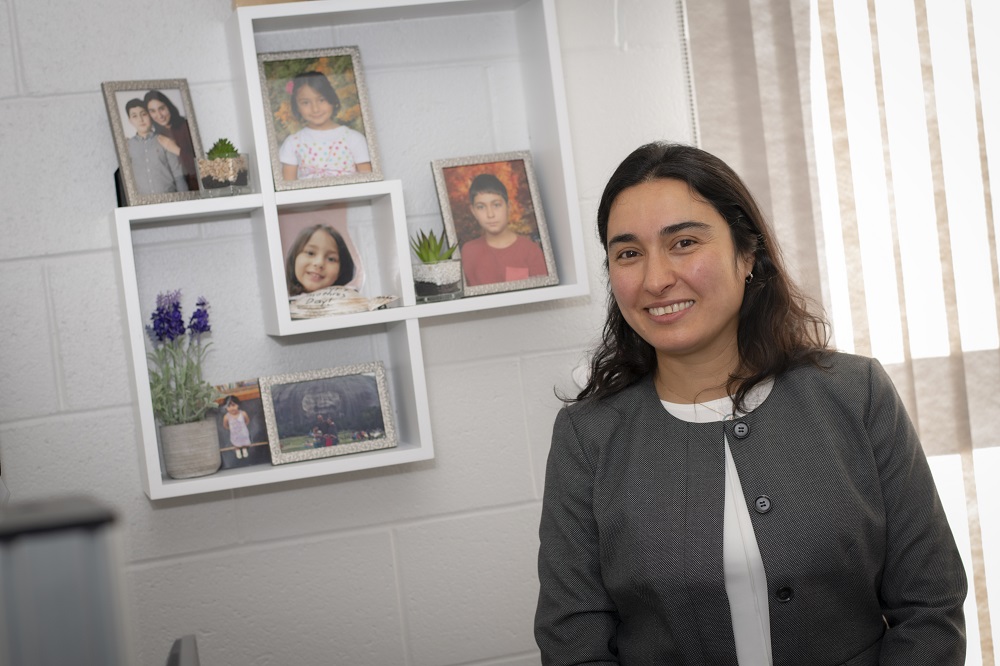 Professor Ulkuhan Guler was inspired by her experience with her own babies to create technology that will help other infants and their families.

Eleven years ago, a sick newborn lay in a neonatal intensive care unit in Istanbul. Years later, his hospital stay would inspire his mother, an engineer now at WPI, to create a miniaturized wireless oxygen sensor that would enable infants to leave the hospital and still be safely monitored from home.

Ulkuhan Guler, assistant professor of electrical and computer engineering and director of WPI’s Integrated Circuits and Systems Lab, has created a prototype of a miniaturized wearable sensor that will be the size of a Band-Aid, measuring blood gases diffusing through the skin and reporting the data wirelessly. By using this flexible miniaturized device, babies can be untethered from medical monitors, enabling nurses, doctors, and parents to more easily and safely examine and hold them. Untethered from these medical machines, an infant even could be taken home, with doctors receiving data on its respiratory function and alerts if the condition worsens.

Guler knows from her own experience how important this is—to both the infants and their parents.

“My son had just been born when they told me he had a respiratory problem and they put him in the NICU,” says Guler. “For three days, they let me see him only three times a day, for 15 minutes at a time. They had to disconnect all the monitor wires to be able to give him to me, but they needed to monitor his breathing—so I couldn’t hold him more than that. I wanted to be close to him. It was so frustrating.”

Guler’s son Musa, her oldest child, has grown into a healthy 11-year-old who's interested in engineering and his mother’s stories of how he came into this world. His sister, Bahar, is 7; she too was ill as a baby. She was severely jaundiced but was treated as an outpatient. Because she didn’t need to be wired to monitors and her doctor realized the importance of skin-to-skin contact for newborns, she was allowed to go home with her mother and go into the hospital twice a day for treatment.

According to the National Institutes of Health, babies who don’t receive that magical touch cry more, are more stressed and have more trouble with cardio-respiratory stability, including oxygen saturation levels.

As her babies grew, Guler—still in Turkey—focused on the smart card security field while studying for her PhD. But when she arrived in the United States, health care and biotechnology caught her attention.

“There was a lot of research being done and I thought I could be a part of that,” she says. “I could use my knowledge to contribute to this field and help people in a different way.”

At WPI in early 2018, Guler was introduced to Lawrence Rhein, MD, chair of the Department of Pediatrics and an associate professor at UMass Medical School. She wanted to know how she could put her engineering skills to work in the medical field.

“I asked him, ‘What do you need in the NICU but it doesn’t exist?’“ she explained. “He gave me a list and I saw among the projects a need that reminded me of what our family had needed—a miniaturized, wireless oxygen sensor. Of course, I chose this project. It really increased my motivation. The project has research value and I knew that from my experience.”

Today, work on that miniaturized oxygen sensor is well under way—Guler and her students having already created a chip for the device—and work has begun on thin, flexible sensors needed for the wearable.