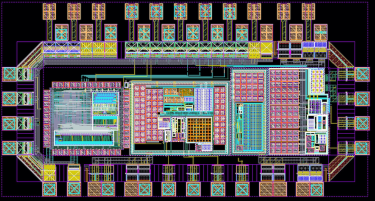 An interdisciplinary group of researchers at WPI is expanding their work to develop a small wireless mobile sensor that will measure a baby’s blood oxygen levels to also create a similar sensor that can act as early detection device for COVID-19 infections.

“COVID-19 is all about respiration,” said Ulkuhan Guler, assistant professor of electrical and computer engineering and director of WPI’s Integrated Circuits and Systems Lab, who is leading the project. “The electronics we have been developing for the baby oxygen sensor will be the same for COVID patients, so we’re in a good position to fine tune the design for babies and adults. We’re producing prototypes for both at the same time.”

The pandemic has put an enormous strain on the healthcare system, filling hospitals, depleting medical supplies, and exhausting healthcare providers. It also has put healthcare workers at risk. According to a study conducted in part by Massachusetts General Hospital, U.S. and U.K. healthcare workers on the front lines of the battle against the pandemic face a nearly 12-times greater risk of becoming infected with COVID-19, and also are at risk of subsequently infecting their families and contributing to the virus’s spread in their communities.

Guler is focused on creating the oxygen sensor, so these doctors, nurses, and healthcare aides can be easily monitored—unrestricted—for changes in their lung function, which would be an early indication that they could be infected. That would give them an early warning to not only seek treatment, but to quarantine themselves so they don’t spread the virus. In that same spirit, the device could be used to monitor people who have had close contact with someone who has tested positive for COVID-19, as well as eligible COVID-19 patients whose condition would allow them to  go home, freeing up hospital beds and easing the burden on healthcare workers.

The miniaturized wearable device (designed to be the size of a Band Aid) is being developed to be flexible and stretchable, wireless, inexpensive, and mobile—enabling the potential patient to be monitored remotely, and continuously without an invasive procedure.

The sensor measures a person’s transcutaneous oxygen level, or the oxygen level of the tissue beneath the skin, which is directly related to the oxygen concentration in the blood stream.

Generally monitored with a blood test, oxygen concentration, a vital indicator of the overall effectiveness of the lungs, is an important gauge for people with COVID-19, which affects the patient’s ability to absorb enough oxygen and expel the proper amount of carbon dioxide (CO2), damaging  tissues and organs.

Guler’s research is receiving attention. Her paper on the transcutaneous oxygen sensor, "Emerging Blood Gas Monitors and How They Can Help with COVID-19," is published in the fall issue of the IEEE Solid-State Circuits Magazine. She also recently received funding from private industry.

Last year, Guler and her team focused their research on enabling sick, hospitalized babies to be untethered from wired sensors, so they can more easily and frequently be examined, held, and even allowed to go home. The team developed the miniature transcutaneous oxygen monitor to measure blood gases diffusing through the skin.

That device is designed to measure PO2, or the partial pressure of oxygen, which indicates the amount of oxygen dissolved in the blood—a more accurate indicator of respiratory health than a simple oxygen saturation measurement, which can be easily taken with a pulse oximetry device gently clamped on a finger—and measuring the PO2 level via a noninvasive device attached on the skin is as accurate as a blood test.

At the beginning of her research, Guler noted that the wearable baby oxygen monitor also could be useful for adults, especially people with severe asthma and seniors with COPD, or Chronic Obstructive Pulmonary Disease, an incurable, progressive lung disease and the third leading cause of death in the United States, according to the Centers for Disease Control and Prevention. At the start of the COVID-19 pandemic, Guler recognized a new need and began modifying the wearable for adults.

Guler is using computer simulations to work on the 1- to 2 mm-squared computer chip that will be the brains of the device. The chip is in fabrication process, and Guler expects prototypes for both sensors to be ready for human trials this coming winter.

The chip, designed to work inside the wearable oxygen monitor, activates the optical sensors, captures analogue signals from the sensor, handles power management, and contains required circuitry. Guler and her team have custom-designed the individual circuits, such as signal-capturing circuits and optical-based read-out circuits. They also are digitizing the analog signals, and creating power from a wireless link.