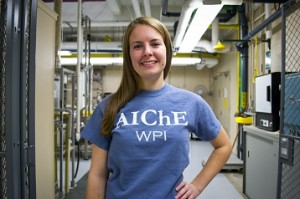 Chemical engineering student Melissa Dery ’15 was singled out by the industry’s professional organization recently for showing leadership in the field. The American Institute for Chemical Engineers (AIChE) chose Dery for a Featured Student profile in the November 2014 issue of its journal , ChEnected.

Dery has been president of the WPI student chapter of AIChE for the past two years. With just one student member recognized each month, Dery’s selection sets her apart from her peers in colleges across the country, and with good reason, says chemical engineering department chair David DiBiasio. “I’ve been here some 30 or more years—department head for 10—and this is the most active, most involved, best [WPI student AIChE] group ever. And I put a lot of that on Melissa’s shoulders,” he says.

Aaron Deskins, assistant professor of chemical engineering and the group’s faculty advisor, says Dery’s effect on the campus organization has to do with “the degree of commitment and buy-in she has. It’s clear that Melissa really cares about this organization.”

Dery, of Tyngsboro, Mass., says she joined the WPI AIChE chapter soon after arriving on campus. She was looking for students to connect with who shared her interests and, after joining, “really saw the potential of the organization.”

During her terms as president, Dery focused on creating programs and events with four main objectives: social, academic, professional, and promotional. Social events include movie nights, cook-outs, and ice cream socials. Academic programs include establishing weekly homework hours for chemical engineering students to get help from peers; software training; and a mentoring program with 40 pairs of students (upperclassmen and lowerclassmen).

To meet professional objectives, Dery’s group has arranged industry tours and brought in guest speakers from the industry as well as graduate students.

“I didn’t do it alone,” Dery hastens to say, noting that the mentor program—of which she is very proud—was not her initiative. “I always try to be open to others’ ideas.”

For the local chapter’s promotional goals, Dery says they focused on “striving to be competitive” at the regional and national levels, thereby raising WPI’s profile in the larger organization. This strategy included 25 members attending a regional conference at the University of Connecticut last year and several members participating in regional and national organization conferences and events, where they presented research, competed in games like a chemical engineering version of “Jeopardy!” and took part in other contests.

DiBiasio points out that not only did the student chapter participate on the national level, but raised most of the money they needed to be able to attend themselves. “We’re definitely putting this chapter up for the AIChE best chapter award,” something WPI hasn’t considered doing before, he says. “I don’t what it takes to win this, but if this group isn’t competitive, I don’t know what is.”

He notes that when the group was asked to start compiling data for the nomination forms, the officers already had a spreadsheet ready—that’s how confident and professional they are. 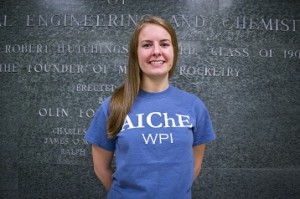 With this new honor on her resumé, Dery, who graduates in May, has begun interviewing for jobs. She says she hopes to work in a segment of the chemical engineering industry where she can travel.

DiBiasio is confident on her behalf. “Melissa will probably get one of the top offers,” he says, noting that overall about 90 percent of WPI’s chemical engineering graduates are employed or accepted to post-grad programs each year. Chemical engineering programs are growing at colleges across the country, and WPI’s undergraduate program is among the largest, with more than 100 students, says DiBiasio.

He attributes the general growth in the industry to a worldwide need to solve problems such as energy and resource shortages, access to food and clean water, and healthcare issues. Plus, these jobs historically pay well. He credit’s WPI’s chemical engineering department’s exponential growth in part to the project- and experiential-based philosophy of education: “Students learn not just how to solve problems, but how these problems and solutions affect people, and that goes along with the interest of young people at this time.”

Also, “WPI has been known as a regional university, and now it’s getting known nationally. Having a large group of students who are engaged and enthusiastic via AIChE helps. It’s been a pleasure to see them grow and see the results.”