The Road To Boston

Jennifer McWeeny takes up the challenge of the Boston Marathon

It’s a long road from Hopkinton to Boston—26.2 miles in fact, if you take the most famous route.

Jennifer McWeeny ran the Philadelphia Marathon in 2013, and despite suffering from the flu, a sinus infection, and bronchitis, she prevailed to qualify for Boston. 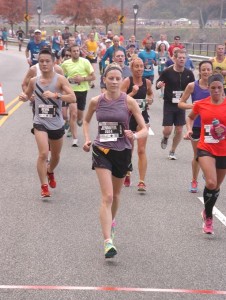 But for many of those who will run the Boston Marathon on Monday, the road to get to the starting line is much, much longer. In the case of Jennifer McWeeny, associate professor of philosophy at WPI, the quest took the better part of 20 years.

A runner, swimmer, and soccer player at Masconomet Regional High School in Boxford, and a cross country runner and track team member at Colorado College, McWeeny decided she’d like to run the Boston Marathon around the time of the 100th running of the race, in 1996. After twice missing the qualifying time in the Honolulu Marathon, McWeeny turned her attention to earning her PhD, thinking the dream of running Boston was lost.

More than 10 years passed, and she decided to give qualifying another shot, this time at the Philadelphia Marathon in 2011. Although she nailed a qualifying time 3:29:31, McWeeny paid the price, injuring her hip and hamstring, which put her out of commission for her planned Boston run in 2013. Later that year, however, she returned to Philadelphia and ran 3:32:31, finally earning a coveted spot in this year’s Boston Marathon.

After 20 years of dreaming and trying, it finally seems that running the Boston Marathon will become a reality on April 20.
Jennifer McWeeny

Even that wasn’t easy. The 38-year-old, who has taught at WPI for three years, went into the Philadelphia race with the flu, a sinus infection, and bronchitis. McWeeny didn’t know until the gun went off if she’d actually run, and didn’t know until the halfway point if she could finish. But she did start the race, and she finished fast enough for her long-sought trip to the starting line in Hopkinton.

“After 20 years of dreaming and trying, it finally seems that running the Boston Marathon will become a reality on April 20,” she recently wrote.

While thousands of runners get into the Boston Marathon by raising money for charities, McWeeny says it was important for her to do it the old fashioned way, by meeting the race’s qualifying standard. On Monday, she’s hoping to finish in the low 3:20s.

As runners in New England well know, training for this year’s race has been even more challenging than usual. 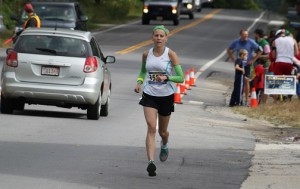 “I can count the amount of runs that I have had on one hand when it wasn’t below freezing temperature, or 20 miles-per-hour wind gusts coming off the Charles, or snow covering all the trails and roads,” McWeeny says. “My legs didn’t even know what it’s like to go out on a sunny day.”

Still, she only missed three days of training in the months leading up to the marathon, and strength testing with her physical therapist showed McWeeny is good to go on Monday. “She thinks I’m ready to have a great race,” McWeeny says.

Besides running, her training included swimming, weight lifting, Pilates, and workouts on an elliptical machine. At its peak, a training week had 50 miles of running plus the equivalent of 12 to 14 additional “miles” of cross training.

While McWeeny was unable to run Boston in 2013, she was watching the race with friends in Kenmore Square when they heard explosions in the distance and got a call from a friend near the finish line who said that bombs had gone off. In the ensuing chaos, it took the group more than six hours to make it back to their homes in Cambridge and Somerville.

Did that make her think twice about ever running Boston? “Not for a second,” McWeeny says. “If anything, it just made me more excited to pursue another qualifier,” and she did just that in Philadelphia, only months after the Boston bombing.

McWeeny has been so focused on the Boston Marathon that she’s not sure what’s next for her, race-wise. Not confident that her body or schedule can handle more marathons and the training involved, she might turn her attention to shorter races like half-marathons or 10-milers, or do more adventure races, which she has done in the past.

But first, she’s going to make that long-awaited and hard-earned run into Boston.