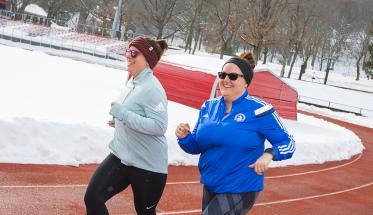 Popular opinion may classify those who run the Boston Marathon as elite athletes attempting an extreme sport achievement, but for many who trek from Hopkinton to Boston in April, the journey is about so much more than sweat and toil.

Jennifer Graves has been running for nine years, and next month will be her fifth marathon, and second start in the Boston classic. The compensation analyst in Human Resources does it for the challenge and her own sense of personal achievement.

WPI staffers Jessica Karner and Meredith Merchant do not consider themselves lifelong runners nor do they clock times that would get them into the upper echelon of about 25,000 qualified runners. Instead, their journey with distance running was to connect with others and use their athletic endeavor as a means to help. 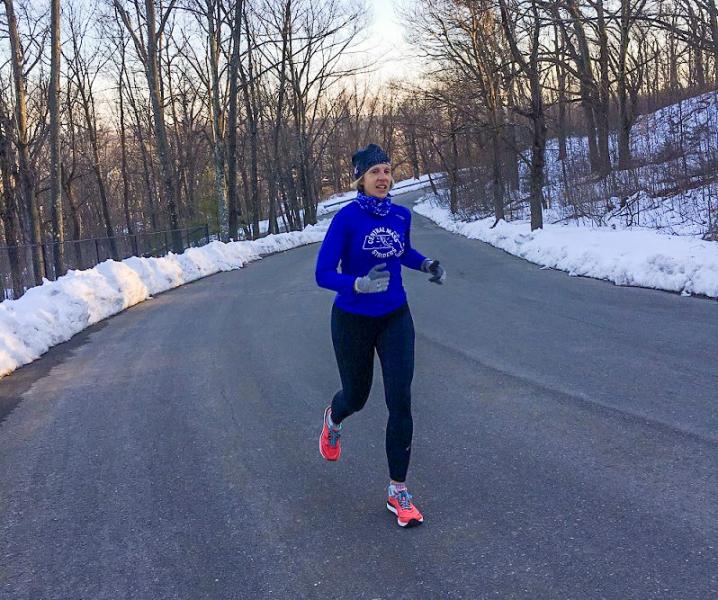 Karner and Merchant are two of nearly 5,000 charity runners who will make the 26.2-mile run on April 16.

Karner, an assistant director in the Office of Academic Advising for the past three years, grew up in Hopkinton, so watching the great race was a favorite pastime. She was a high school athlete but never considered herself a runner. Her Hopkinton background, though, did expose her to the charity group she would eventually decide to run for: The Michael Lisnow Respite Center. The organization runs group homes, respite homes, and programs for people with disabilities, and with 60 team members has one of the largest local charity Marathon teams.

“It has a huge impact on the community there,” Karner says. “The work they do to include people with disabilities in the community is really great. I have a family friend who lives in one of their homes for adults and he got a job through the center. Watching all these people do these incredible things … they make people so happy.”

This will be Karner’s second run in the Boston Marathon and her fifth marathon since she started running six years ago.

“I started running in 2012, after my mom passed away after a 28-year battle with cancer,” she says. “My dad and brother were runners and I wanted something to connect with them.”

“I ran my first marathon because two of my friends bullied me into it,” she jokes, and she vowed at the time she would never run another marathon. But the running bug stuck.

Graves began running in 2009 with the encouragement of her husband—a “talented, fast runner," she says—who had tried getting her to run for years.

“I thought it was ridiculous,” she recalls, but she secretly trained for a 5K on her treadmill and competed in the Jay Lyons Memorial 5K Road Race in Worcester.

“It was a glorious moment for me,” says Graves, who now runs with the Central Mass Striders. “It was very emotional to run and have people cheer for me.” 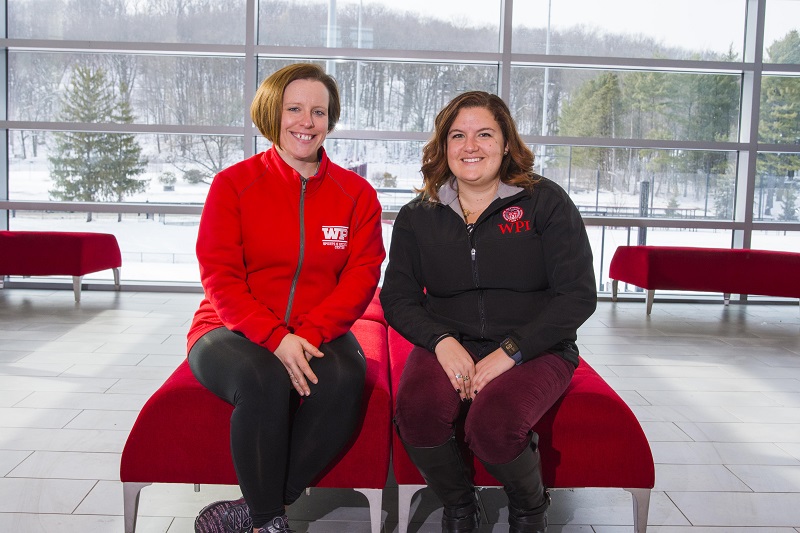 Meredith Merchant (left) and Jessie Karner take
a break from training in the Sports & Recreation
Center.

She kept training, working up to 10K and half marathon competitions, running the Tufts 10K for Women later that year. For their 10-year wedding anniversary her husband suggested doing something special together—the Rockfest Half Marathon at Hampton Beach, NH, which she subsequently ran a second time.

Graves’s first was the 2014 Baystate Marathon in Lowell. Training for that was intimidating, she says. “It was terrifying. They say that a 20-mile training run is long enough, that the last six miles will happen. It did. I’m not a fast runner, but I made it through.”

For Merchant, Assistant Director of Facilities and Recreation since 2012, running was a sport she eventually grew into. A three-sport college athlete (softball, volleyball, indoor track), she began running as a graduate assistant at Springfield College, training for a few 5K races, then eventually a half marathon. It was a way to extend her athletic goals but it became more than that.

Merchant has run the Falmouth Road Race for the Dana-Farber Cancer Institute, the Warrior Dash for St. Jude’s Children’s Research Hospital, and the Harpoon 5-miler for The Angel Fund.

“Running is something I am passionate about, and in doing that, it is a way for me to give back, an opportunity to help others on another level." Merchant will be running for one of the largest charity teams in the Marathon this year, Dana-Farber.

“I chose Dana-Farber because it was the closest to me. For many people—coworkers, family—cancer has been around us professionally and personally for a few years. You don’t know what to do at the time when it happens. It’s the one that hit home the most,” she says.

As charity runners, Karner and Merchant have some hefty minimum requirements for fundraising. Karner must raise $5,000 for the Michael’s Miracle Marathon Team and Merchant has a $12,000 goal for the Dana-Farber Marathon Challenge.

“Fundraising is like a part-time job,” Merchant says. “With social media accounts you have to continually push, but you are doing it for a great cause.”

Contributing to the Cause

Karner and Merchant are both fundraising for their teams leading up to the Marathon. If you're interested in learning more about their efforts or making a donation, visit their fundraising pages for the Michael Lisnow Respite Center and the Dana-Farber Cancer Institute.

Another task that's like a part-time job is training for the actual race.

“It comes down to mentality,” says Merchant. “It gets really hard when life gets in the way—in the back of your head you know you have to get the run in.” 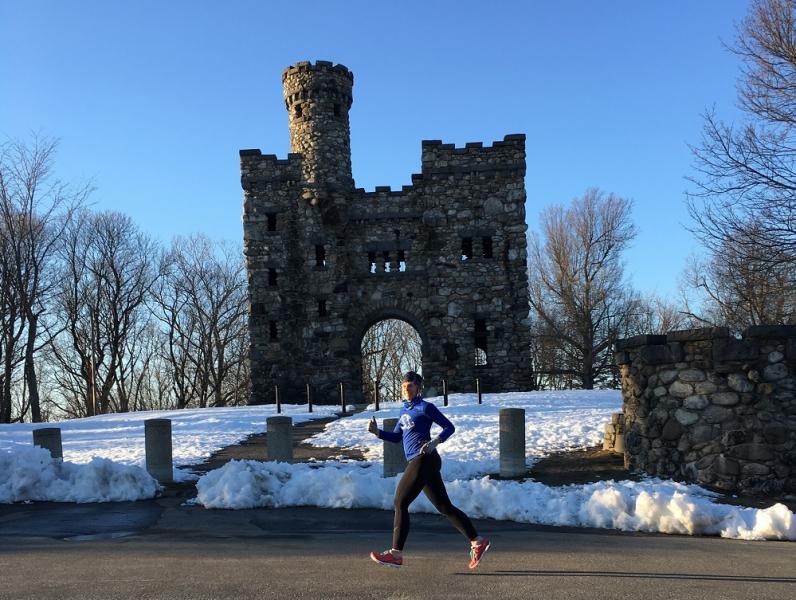 Graves in front of Bancroft Tower.

Runners in New England, especially central Massachusetts, have both a challenge and an advantage when it comes to preparing for the Boston Marathon. Training all winter prepares those runners for whatever Marathon Monday has in store. This winter has seen periods of extremely warm weather—even into the 70s—as well as deep arctic blasts, snowstorms, and rain.

She uses steep George Street and Bancroft Tower Road to train for the hills.

Karner, who lives in Waltham, has used a treadmill and the track at WPI to squeeze in runs when the weather or roads might not be safe. Her hill training involves quick pacing sessions on a treadmill.

And then there are the famous hills on the Marathon course. Although Boston is a net downhill course, there are fierce hills to climb late in the race, including Heartbreak Hill in Newton near mile 20.

“I was really scared of Heartbreak last year, but I did it as two minutes of running and 30 seconds of walking – in three sessions,” Karner recalls. “The hardest hill is actually at mile 24 when you go over the Mass Pike.”

Merchant, who lives in Worcester, is using the city’s hilly topography as a training tool.

“I have incorporated the Worcester hills and I run on the West Boylston rail trail and Salisbury Street near WPI. You’ve got to trash your quads a couple times to get used to it mentally,” she explains.

Both women said the mental game of running and training for a marathon is key. Building the mental endurance and toughness takes time but it has rewards not unlike the physical conditioning that comes with distance training. 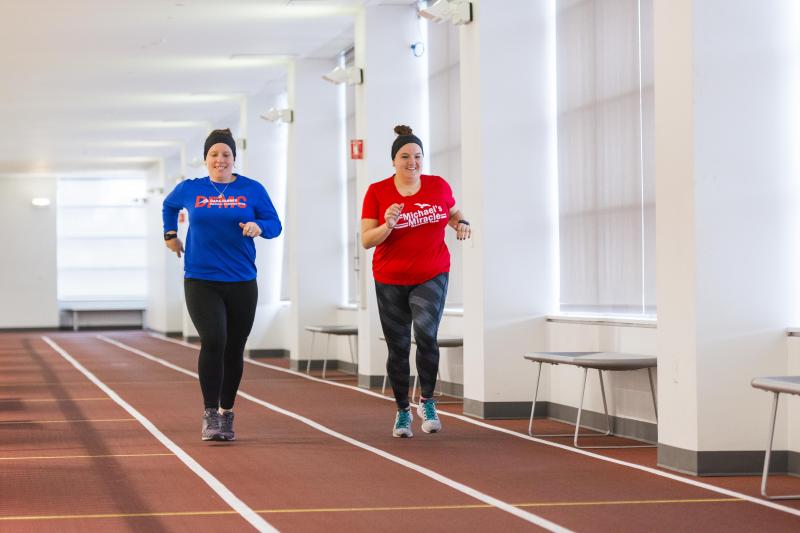 Merchant (left) and Karner get some running in at the
Sports & Recreation Center.

“I like that I get lost in running,” Karner says. “I go out for a run and lot of my worries either subside or I solve them in running. Or I ignore them. The other thing I like is the community. Runners are really nice. Some of my best friends were runners before and I think we are closer now. I think it does bring people together.”

Boston is a great bucket list item for a runner, says Graves. “I didn’t expect it to be such sensory overload,” she says. “You’re packed in, crowded, and it takes miles for it to spread out. Along the course people are cheering and playing music. Some are barbequing. … The Newton hills live up to their billing.

“My goal is personal accomplishment. Achievement—that I can do it. I want to set an example for my son (13), who thinks this is very cool.”

The amount of support Merchant has received has been overwhelming, she says. “The WPI community is constant. Sometimes you need that to keep yourself accountable. And family is always willing to help. It’s so awesome, they are the people that keep me going.”

On Marathon Monday there will be a few thoughts likely in each of the women’s heads as they prepare to start and run to Boston.

Merchant admits she will be nervous just about finishing.

“It will be an emotional day for sure.  When you are in training, you are so focused on the running, when the day of the race comes--that’s when you realize the impact not only what you have had on others, but what others have had on you during your journey.  Because of all, I’ll get across the finish line with a smile on my face.”

Karner will likely hear her mother’s last words to her: “Live your life happy.”

She explains the meaning of that phrase this way, “You have to live each day like it is the best day of your life. I think she just said it because she believed it wholeheartedly. I think about that when I run and when it gets hard I think about her words and the Respite Center.”