From Three Acts of Generosity, One Remarkable University 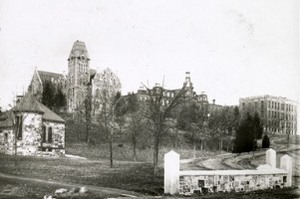 The campus in the 1880s. From left, atop the
hill, Boynton Hall, Washburn Shops, and
Salisbury Laboratories.

WPI exists today because three men with different backgrounds and different ideas about education were united through acts of generosity. These are their stories.

The first of these men was shaped by his hardscrabble youth in New Hampshire. John Boynton had little opportunity for formal education while laboring on his father's farm in Mason (he was able to learn only the rudiments of reading, writing, and "ciphering to the rule of 3" in Mason's one-room schoolhouse). Determined to rise above his humble roots, he left home at the age of 30 to learn the craft of manufacturing tinware.

While the machinery of the industrial revolution was ramping up in the early 19th century, entrepreneurs could still do well handcrafting cookware, storage containers, and other household goods from tin. Boynton eventually moved his manufacturing operation to Templeton, Mass., where his metal stampers and decorators supplied a team of peddlers in horse-drawn wagons who distributed his goods throughout New England, making him, ultimately, a wealthy man.

When he turned 55, he sold the business to his cousin, David Whitcomb, and retired. He had a second, brief career in banking, but in the waning days of the Civil War, as he reached his 70s, Boynton resolved to use his fortune to help others avoid the hard life he'd known in his youth. He decided to use the bulk of his estate, $100,000, to create a new kind of college that would provide a practical education to the professional and working classes, including mechanics, craftsmen, and farmers (most colleges at the time taught the classics to future doctors, lawyers, clergymen, and teachers; he knew that an expanding industrial economy would also need educated people to assume leadership positions in manufacturing and commerce).

He entrusted his idea to Whitcomb, who brought it to a group of Worcester's most prominent thinkers and power brokers. He told Whitcomb that while he would endow the new school, the citizens of Worcester would have to provide it with a building. Having planted a seed, Boynton remained in the background while others set to work to nurture his vision.

Boynton was not the only successful businessman in Worcester Country to dream about starting a technically oriented college. Ichabod Washburn, who had parlayed his early success as a blacksmith into a mighty manufacturing enterprise, wanted to replace the traditional apprenticeship system with a formal education that would steep tradesman in the principles of chemistry and mechanics. He came close to realizing this vision in the 1859s, but an economic downturn had left potential investors short of funds.

Boynton decided to use the bulk of his estate to create a new kind of college…he knew that an expanding industrial economy would also need educated people to assume leadership positions in manufacturing and commerce.

Washburn, himself, was a product of the system he sought to revamp. He was born in Kingstown, Mass., to a mariner who died at sea. He left home at the age of nine and at 16 apprenticed himself to a blacksmith to learn that trade. By the age of 20, he was a journeyman blacksmith. He started his first forge in Millbury, Mass., a few years later, and then moved it to Worcester. In 1835, with his twin brother Charles, he started a new business that made wire and wood screws.

When Ichabod Washburn invented a new method for drawing wire from steel rods, he revolutionized wire making and set out to build what would ultimately become the largest wire making business in the nation. Churning out piano wire, telegraph wire, insulted wire, hoop skirt wire, and enough barbed wire to tame the West, the Washburn & Moen Company would employ more than 3,000 people by the late 1880s.

Throughout his business career, the man who many in Worcester called Deacon Washburn gave generously of his wealth. He helped make possible the construction of Mechanics Hall, founded Memorial Hospital and the Home for Aged Women, and contributed to many other educational, charitable, and religious institutions (including Lincoln College in Topeka, Kansas, which renamed itself Washburn University after he gave the school a gift of $25,000). 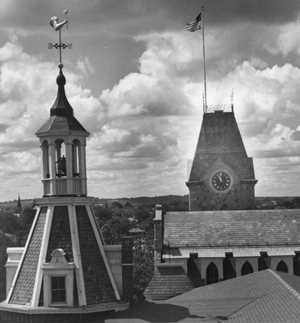 But as the mid-1860s approached, Washburn had not let go of his hope of founding a college. So it was a shock to receive a letter soliciting his support for a new school proposed by an anonymous philanthropist from Templeton. He spent several weeks considering his response. In the end, he agreed to merge his plans with those of the anonymous donor. On the subscription paper for the new school he pledged up to $10,000 to build a fully equipped machine shop; he later endowed the building with a gift of $50,000.

Washburn's gift would do more than enhance the new college's campus. By reconciling Washburn's notion of a practical education for tradesmen with Boynton's desire to prepare future leaders for a rapidly changing technological society, the school's leaders forged a new and influential model of higher education, one where students were not only immersed in the theory of their disciplines, but were required to put that theory into practice. The balance of theory and practice would be given physical manifestations in the towers of WPI's first two structures, the classroom building, which would be named for John Boynton, and the machine shops, which would bear Washburn's name.

Washburn wanted to replace the traditional apprenticeship system with a formal education that would steep tradesman in the principles of chemistry and mechanics.

With plans in place for Boynton Hall and the Washburn Shops, all that was needed was a place to put them. That problem was solved by Stephen Salisbury II, a Harvard graduate who was then the city's most prominent businessperson and benefactor. Salisbury led the list of subscribers for the new institution, and gave the largest gift toward the construction of Boynton Hall: $22,000. He also donated a six-acre parcel of land near his home for its campus. On top of those contributions, he gave $60,000 for an instructional fund (to which he later added $50,000). With these acts of generosity, WPI was launched with funds and real estate holdings valued at between $230,000 and $250,000 ("a larger endowment than any other institution of learning in this Commonwealth, if not in the country, ever had at its founding," one newspaper reported).

All that was needed was a placed to put Boynton Hall and the Washburn Shops. That problem was solved by Stephen Salisbury II.

When John Boynton's offer came to light, it was natural for Salisbury to be among the leaders asked to contribute to and shape the new college. Salisbury would go on to serve as the first president of its board of trustees, a post he held until his death in 1884. He also continued to support the young school financially, quietly making up deficits that cropped up regularly. After his passing, his son, Stephen Salisbury III (best remembered today as the founder of the Worcester Art Museum), gave $100,000 to build Salisbury Laboratories in his father's honor. He also donated 18 acres across from the campus to create Institute Park.

Today, as one walks along the access road atop Boynton Hill, with its views of downtown Worcester, one passes in quick succession the granite façade of Boynton Hall, with its clock tower, the solid red brick walls of the Washburn Shops, with its tower topped with a weather vane depicting the blacksmith's arm and hammer, and Salisbury Laboratories, with its stately entrance framed by a terra cotta arch. Still alive with the academic and administrative life of the Institute, these three buildings are also silent reminders of three extraordinary men and the generosity that gave WPI a solid foundation and an enduring educational tradition.