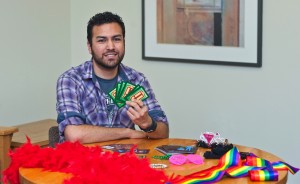 When graduate student Michael De Anda sat down to create a tabletop card game for his master’s presentation, he wasn’t really looking to make another Monopoly. If anything, De Anda wanted to make players just a little uncomfortable.

De Anda’s game, TRANS-Gression, challenges players to take a new look at gender identities and the gender roles people assume. “For one thing, I wanted to affirm the identity of queer individuals and validate their identities,” he says. “I wanted to draw from this and build a game to allow people to conceive of more fluid gender identities.”

TRANS-Gression players draw cards and use props (including a most-coveted feather boa) in the quest to be the first to collect five items, says De Anda. That player earns the “Most Fabulous Drag Queen” title. But the cards are not regular cards. They challenge our social trainings and social identity, specifically male identity, he says.

“When he came to me with this project, I was just delighted,” says Brian Moriarty, IMGD professor of practice, and one of De Anda’s advisors. “This is just the kind of project we like to do. It is a serious application for a game design.” Moriarty especially liked TRANS-Gression’s ability to use the “magic circle” of game design – a sort of safety zone that allows players to explore boundaries within the rules of the game.

And Moriarty said the game came at the right time. Thirty years ago, he says, no teacher or student would have dared share a game like TRANS-Gression in class for fear of severe repercussions. Right now, gender issues and games are so popular that the first-ever GaymerX, a gaming and tech convention focused on LGBTQ culture, meets this summer. De Anda hopes to bring TRANS-Gression to the convention, says Moriarty.

Some of the provocative cards are meant to stir up conversations. When one player gives another the tip card, for instance, he or she can’t just hand it over. The card is instead slid into a waistband – a play on how drag queens are tipped. “I wanted players to feel a level of discomfort doing this,” says De Anda, “challenging sexual gender identities.” .

He researched drag theorists and used drag because it uses gender icons of both genders on one body. “Drag is essential to the camp and queer identity,” he explains. Camp, he says, is the embodiment of the queer identity and is not typically considered gay or lesbian, so it encompasses a wide range of gender identities.

De Anda says he initially wanted the game to be something gay men could play with their friends (gay or straight) to shed light on the challenges and difficulties members of the LGBTQ community face in greater society.

But players give TRANS-Gression rave reviews. When Felicia Vidito, administrative assistant to the department head of chemical engineering, sat down to play, she didn’t know what to expect.

“It was a learning experience, and it did create a higher sense of awareness,” she says. “But really, it was just a ton of fun. We had a blast.”