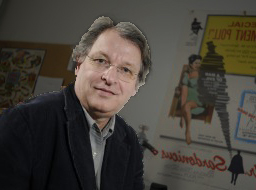 WPI Professor Brian Moriarty became somewhat of a celebrity in 2011 when he came to the defense of film critic Roger Ebert, who stated in 2005 that video games could “never be art.” At the 2011 Game Developers Conference, Moriarty gave a lecture attempting to explain why Ebert’s incredibly unpopular argument might be worth considering. “The question as to whether games can be ‘art’ depends, naturally, on your definitions” he says. “But it is the nature of art to innovate and redefine us. It seems likely that, despite the misgivings of old romantic fogeys like Ebert and me, digital games will join photography and cinema as the latest in a line of media that have come to be recognized as fine art.” Moriarty’s entire lecture was published in a major gaming industry magazine and later on Slashdot, a tech-related news website. It received hundreds of thousands of comments in just a few days, and he jokes that he managed to “retain his sanity” by promising himself not to read any of them.

Despite the controversy surrounding Moriarty’s lecture, his professional resume makes it evident he has the experience to back up his claims. Before coming to WPI in 2009, he worked in the digital game industry for 30 years, selling microcomputers at a Worcester Radio Shack and later working as a technical writer for Bose. After that he was technical editor of ANALOG Computing, an Atari hobbyist magazine, in which the source code for his first adventure game was published. His big break came in 1984 when he joined Cambridge-based Infocom, which was experiencing success publishing a genre of games that, Moriarty notes, is now considered “interactive fiction.” He authored three Infocom games and later accepted a position with Lucasfilm Games in California. “They didn’t have to twist my arm very hard,” he admits.

In 1990 the company published his first graphic adventure game, Loom; Moriarty is also credited for a section of Steven Spielberg’s The Dig. He later worked for Rocket Science Games and helped design an early full-motion video game and co-found Mpath Interactive, an online game-matching service that morphed into HearMe, the Internet’s first voice chat system. As creative director at Comverse and at ImaginEngine, he was able to fulfill a childhood dream when he produced and presented planetarium shows at the McAuliffe Challenger Center at Framingham State University.

Over the course of his career, Moriarty has garnered awards such as MacWorld’s Adventure Game of the Year Award for Loom, Family Computing’s Critics’ Choice Award for Wishbringer, and Computer Entertainer’s Best Adventure/Fantasy Award for Trinity. He made the transition from the game industry to academia after conducting a master class for WPI’s Interactive Media and Gaming Development program in 2008. He applied for a position as a professor of practice in Game Design, he notes, because he was excited for the opportunity to share his practical experience with students. Since then, he has developed multiple new courses about game design and one about the history of entertainment technology. Moriarty appreciates that IQPs and MQPs allow him to work with students who can delve further into topics relating to his work than he could individually. “I love working here,” he says. “I can’t imagine a better climax to a professional career than sharing what I know with young people bristling with energy and enthusiasm.”