After becoming WPI’s head wrestling coach, straight out of college and just 22 years old, Phil Grebinar went on to build both a successful program and an extended second family.

His teams became a dominant force in New England, and the school’s alumni wrestling group is “super active, super tight,” says Steve Hall ’87, who wrestled for Grebinar and is the current head coach.

Already a member of the WPI Athletic Hall of Fame, Grebinar was honored in 2010 when an endowment to help support the wrestling program that was named for him. And just last month, the wrestling community literally went to the mat for the man who developed the program over 33 years as head coach, inscribing his name on a 48×48-foot competition mat.

Grebinar wrestled and played football for a year at Rutgers University before transferring to Cortland State in New York, where he played both sports and decided he wanted to become a physical education teacher.

He came to WPI as head wrestling coach and an assistant football coach. He says he found a wrestling program that lacked stability and had trouble recruiting athletes.

“If you don’t have talent, it’s hard to win,” he says, adding that coaching can only carry a team so far. “Talent wants to surround itself with talent. It makes it a little easier to win.”

Grebinar stepped up the recruiting and his teams worked their way to the highest winning percentage in WPI sports, coming out on top in more than 400 matches. He coached 195 All-New England wrestlers, including Coach Hall.

After the 2004–05 season, Grebinar stepped down and now is director of the physical education department, where he teaches and is involved in scheduling, fund-raising, and WPI’s Athletic Hall of Fame.

Because he referees other college (and high school) matches, he usually keeps some distance from the WPI team. He says the only time that he has seen a complete WPI match since his retirement was when the mat was dedicated. 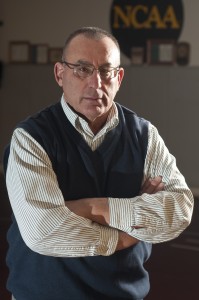 But when he was interviewed the last week of February, he was busy as co-director of the 2013 NCAA Division III Northeast Regional Wrestling Tournament, which brought 18 teams to the WPI campus.

Hall, in his third year as head coach, says he models his own coaching style after Grebinar, who taught his wrestlers not only how to succeed on the mat, but how to balance athletic and school life.

Hall says his mentor was passionate about the sport, detail oriented, and always prepared for the competition—knowing opponents’ strengths and weaknesses.

It’s safe to say that under Grebinar, wrestling became a point of pride at WPI.

“It was a popular sport here on campus,” Hall says. “It drew great crowds, packing Alumni Gym to the rafters.”

By putting Grebinar’s name on the new mat—which helped replace mats that Hall had wrestled on—the program ties the old to the new, adding to the heritage of WPI wrestling, according to Hall.

Asked to describe Grebinar’s legacy, the current coach is quick to answer: “It’s known as the WPI wrestling family,” says Hall who points to wrestlers from 30 years ago and their close ties to campus. Many returned for the recent mat dedication.

The dedication, which was attended by Grebinar’s wife, his two sons and their wives, and his six grandchildren, meant a lot him. He says it acknowledged that he had achieved something worthy.

Still, he says he might be sticking around for a while, gesturing to his office in the new Sports & Recreation Center.

“I had been living in Alumni Gym for 40 years,” he says with a laugh. “I might stay longer just because this building is so nice.”