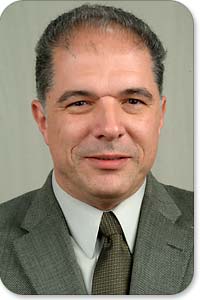 • On Nov. 15, Bogdan Vernescu of the Mathematical Sciences Department received the President’s Award from the National Professional Science Master’s Association (NPSMA) at its annual meeting in Arlington, Va. The award, “for outstanding contributions and service to further the cause of the PSM initiative,” honors Vernescu’s pivotal role in the development of the professional science master’s degree in the United States.

Involved in the creation of two of the earliest PSM programs in the country—at WPI—Vernescu, whose field is partial differential equations and materials science, also helped spearhead the development of the national association. Serving as its first and fifth president, he remains on its Board of Directors.

The professional science master’s degree emerged as an answer to a particular gap in the bridge between the academy and industry.

In 1997 the Sloan Foundation was formed to support interdisciplinary master’s degrees in science supplemented with professional development.

“In science, they were finding that the master’s degree was not perceived as a very good degree by employers in terms of starting salaries,” says Vernescu, who stepped down last year after 10 years as head of the WPI Math Department. “It was perceived as a stepping stone to the PhD or a consolation prize for those who didn’t go on to get the PhD. This was in contrast to the MBA or computer science or engineering master’s degrees.”

Conversely, the professional science master’s now blends advanced academic study with business experience. Graduates enter the work force at higher salaries with strong scientific knowledge as well as the professional skills to succeed in industry or the government and nonprofit sectors.

PSM programs across the country vary in terms of the details of their specific requirements, though all are “labor intensive to start,” says Vernescu. No matter the particular scientific field, every program needs “an advisory committee from industry to help develop curriculum and provide and suggest internships for the students. There has to be some industrial or real-world experience for the students, as well as a professional development skills component.”

In 2007 Vernescu was the principal investigator on a $500,000 grant from the Sloan Foundation to begin a national organization for PSM programs to support program administrators and faculty members. In the past seven years, the NPSMA has established best practices and overseen a significant rise in the number of programs. Last month’s annual meeting included a celebration at the Library of Congress that recognized the 300th program. Fields run the gamut from biotechnology and medical-related sciences to agriculture and national defense.

PSM programs enhance the symbiotic relationship between university and industry. They benefit the university by attracting students as well as strengthening ties with alumni and the corporate world. Moreover, says Vernescu, “they respond to the work force need because they’re being formed in conjunction with advisory boards with direct connections to industry.”

Vernescu believes that programs will continue to grow apace.  “Students are not only getting jobs,” he says, “but also seeing significant salary increases for professional degrees as opposed to the bachelor’s, which is exactly what we wanted.”