The former head of WPI's Mathematical Sciences Department, Vernescu has held the position on an interim basis since October 2014 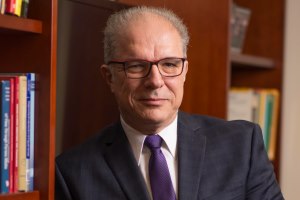 Worcester Polytechnic Institute (WPI) today announced the appointment of Bogdan Vernescu, professor of mathematical sciences and former head of WPI's Mathematical Sciences Department, as vice provost for research. Vernescu has held the position on an interim basis since October 2014.

The vice provost for research (VPR) has overall responsibility for the operation and non-financial support of WPI's research enterprise, including oversight of university-wide research institutes and centers and the offices that administer research sponsorship and intellectual property and innovation. As the university's chief research officer, the VPR provides the vision and leadership to enhance faculty research efforts and increase support for research at WPI by government agencies, corporations, foundations, and other organizations.

"I am delighted that Bogdan will continue to lead WPI's research efforts," said Bruce Bursten, WPI's provost and senior vice president. "As a university, we have lofty expectations for ourselves in the growth of our research enterprise. Bogdan has the expertise and the leadership ability to help us achieve those goals. It will be a pleasure for all of us to work with him to advance the impact of WPI."

Bursten noted that as interim vice provost, Vernescu has already made significant strides in elevating WPI's capabilities as a national research university. Most recently, he co-led the effort to develop and implement the research portion of WPI's new strategic plan, Elevate Impact. He also reorganized and reconstituted the Office of Sponsored Programs to assure that it is appropriately staffed to support WPI's rising level of research sponsorship. And he helped forge new joint research programs with the University of Massachusetts Medical School, including the launch of an annual research seed funding program that encourages research partnerships between UMass Medical and WPI faculty members.

In the months ahead, Vernescu says he will work with the faculty and WPI's senior leadership to launch new initiatives aimed at augmenting WPI's ability to respond to major funding opportunities by assembling multidisciplinary faculty research clusters from across the university to support the development of strategic research initiatives and respond to immediate needs of scientific and engineering importance. He also plans to establish a research council to help identify new funding opportunities and vet WPI's submissions to highly competitive and high-profile funding programs.

"WPI's research enterprise has grown significantly in size and sophistication over the past five years with the recruitment of outstanding research-active faculty members, the doubling of our external research awards and our awards received per faculty member, and the development of a robust campus infrastructure to support our research ambitions," Vernescu said. "We are well positioned to take our research efforts to the next level and successfully compete for and lead the kinds of large-scale interdisciplinary, multi-institution research projects that define world-class research today."

Vernescu joined the WPI faculty in 1991 after serving as a researcher at the Institute of Mathematics of the Romanian Academy in Bucharest, Romania. His own research involves the use of mathematical techniques to model multiscale phenomena, including the ways in which the observable (macro-scale) properties of heterogeneous materials like rocks, bones, composites, and ceramics are determined by the interaction of component materials at smaller scales, with an eye to the design of novel materials.

In 1997 he co-founded WPI's Center for Industrial Mathematics and Statistics (CIMS) and served as its director for six years. CIMS was established to serve as a mathematical resource to industry by supporting student project work and faculty research aimed at addressing complex problems posed by the center's corporate sponsors. CIMS has received support from the National Science Foundation, the Alfred P. Sloan Foundation, the GE Foundation, and the Society for Industrial and Applied Mathematics (SIAM).

Vernescu was head of WPI's Department of Mathematical Sciences between 2003 and 2013, a period that saw the department's external research funding more than double and its postdoctoral scholars and PhD students more than triple. As chair, he also oversaw the appointment of the department's first named chair, the Harold J. Gay Professor (named for a longtime professor of mathematics at WPI); the development of multidisciplinary MS programs in bioinformatics and data science; and the establishment of professional master's programs in financial mathematics and industrial mathematics.

WPI's professional master's programs, funded by the Sloan Foundation, and were among the first of the more than 300 such programs around the country to be established. In 2007, with a $500,000 award from Sloan, Vernescu helped found the National Professional Science Master's Association (NPSMA) to promote and support these programs. He was the association's founding president and served two terms on its board of directors.

Vernescu earned BS and MS degrees in applied mathematics from the University of Bucharest and a PhD in mathematics from the Institute of Mathematics in Bucharest, Romania. An Honorary Member of the Institute of Mathematics, where he was the Bitdefender Fellow in 2010, 2012, and 2013, he has served as a visiting professor at MIT, at the Universities of Rouen, Nancy, Chambery, and Metz, France, and at the University of Rome, La Sapienza. He is currently a member of the AMS-ASA-MAA-SIAM Joint Data Committee. In 2013, he received the President’s Award from NPSMA.