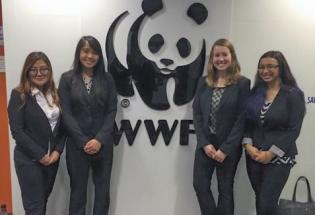 Caitlin Burner ’17 traveled to the shores of Lake Superior last month to present a poster at the International Symposium on Society and Resource Management (ISSRM) with her team’s findings on conservation efforts for Chinese white dolphins in Hong Kong’s Pearl River Delta region. 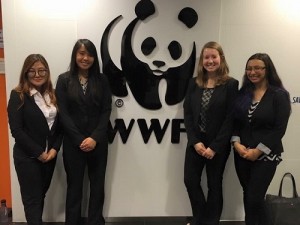 She was one of four members of an IQP team who traveled to Hong Kong earlier this year to study the impact of marine traffic on the dolphins’ habitat. Amanda Agdeppa, Yejee Choi, and Giselle Verbera were also members of the IQP team.

Burner was scheduled to present a poster at the ISSRM in Houghton, Mich., accompanied by one of her IQP advisors, Creighton Peet, IGSD associate teaching professor. They assessed the feasibility of easing the impact of marine traffic within the dolphins’ habitat in Hong Kong’s territory at the behest of the World Wide Fund for Nature (WWF) in Hong Kong.

The partnership with organizations in Hong Kong such as WWF goes back to the early 2000s, says Peet. As director of the Hong Kong Project Center since 2004, he says his job is to identify organizations that need research done but don’t have the personnel or time to do it.

For this project, after preparing to do the project for seven weeks on campus, the students spent eight weeks in Hong Kong at the beginning of this year carrying out their research. They monitored and recorded the marine traffic—mostly ferries (some of which are high-speed), marine police boats, and fishing boats; they also observed the resident dolphins, surveyed Hong Kong’s general public, and interviewed relevant stakeholders, such as ferry companies and government agencies, before making recommendations to WWF. Their report is titled “Determining the Feasibility of Easing Marine Traffic in the Chinese White Dolphin Habitat in Hong Kong.”

According to Peet, the Chinese white dolphin historically has thrived in the Pearl River Delta. The combination of salty seawater and fresh river water in the delta, along with relatively shallow water, makes it an ideal feeding and breeding ground, he adds.

But the species has rapidly declined in the last decade or two, down 60 percent, to about 60 dolphins, according to the team’s report. Constant marine traffic, bridge construction, pollution, and overfishing have all contributed to the dolphins’ decline. The WWF has taken note of these factors and asked WPI for help assessing what could be done to ease the marine traffic aspects of the problem. 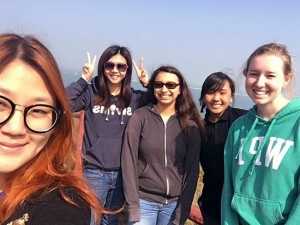 Working with Michelle Luk, marine conservation officer with the WWF, the students visited places where they could observe the number of boats and their activity in the near shore areas off of Lantau and Cheng Chau Islands. They also went out on a boat to observe the dolphins feeding and how they interacted with boats in that area.

From their observations and interviews, the WPI team determined that slowing down boats and rerouting traffic away from prime feeding and nursery areas would help the dolphins, especially the young, evade the boats, especially during the breeding season.

“We’ve had the same problem off the coast of Massachusetts with whales,” says Peet. “One thing we’ve done in our area is to reduce the speed of boats to help prevent the whales from getting cut” by boat propellers. The noise from the boats’ engines also can disrupt the animals’ echolocation abilities, which is how they find their food.

But ferry companies in Hong Kong, whose business relies on moving customers quickly from one place to the next, are less willing to make changes that could affect profits, the students found.

The team also recommended a public education program, as many area residents they interviewed were largely unaware of the dangers to the dolphins. Some said they would be willing to change their behaviors or even pay a little extra for their ferry tickets if it meant the ferries would slow down and spare the dolphins, according to the report.

Team member Choi says their survey of local residents found that they were aware that the dolphins are endangered, in a general sense, but they did not know the details of any specific threats. “When we asked what the respondents felt was the biggest problem that the Chinese white dolphins were facing, a lot of the public had no response at all, indicating that a good portion of the public did not know about any problems that dolphins are currently facing.” she says.

When the students asked in the survey how willing the residents would be to have ferries take a longer route around the dolphins’ habitat to get to their destination, about 70 percent of their respondents indicated they are “very willing” or “willing.” 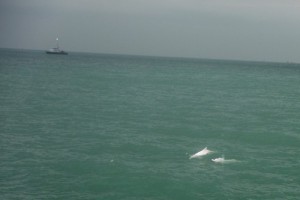 “And 80 percent of the people indicated that they support or strongly support reducing the speed limit of the vessel,” says Choi. “Also, they were very supportive to pay an extra ticket surcharge under the condition that the extra charge will go directly toward the Chinese white dolphin conservation organizations.”

Choi pointed out that the project team worked with the WWF, which already has its own department specifically working on the conservation of the Chinese white dolphin. “With the results, conclusions, and suggestions we gave them, I believe they will try to interact with the government and local universities to implement those and find various solutions to conserve the dolphins effectively,” she says.

By the end of the IQP, Choi came to love the dolphins, and the overall experience improved her writing, communication, and presentation skills, which she considers a necessity for an engineer. “Upon coming back from the IQP, I had a class that involved a lot of presentations, and I knew that I am ready for it because I am very confident in my presentation skill now,” Choi says.

Before leaving Hong Kong, the team presented its 152-page report to an audience including local officials, conservationists, and WPI alumni, including Glenn Yee ‘74, and Bernie Ting ‘91. The WWF will use the information from the students’ report to lobby the government and other stakeholders to make changes and try to preserve the Chinese white dolphin species, says Peet.

In addition to studying the dolphins, the students traveled to Macau as well as other sites within Hong Kong, learning about Hong Kong’s history and culture.

The experience also helped the students learn to work as a team.

“One of the aspects of doing an IQP is that you have the opportunity to work professionally with people you’re not used to working with.” Noting that each member of the team felt passionately about the project, Peet says, “These four students worked together very well.”