Ideally, an IQP shows students how the intersection of science and technology impacts real life issues in light of cultural, social, and human relationships. Last year, four students on an IQP at the Wellington, New Zealand, Project Center found their project to raise awareness of the Māui dolphin changed them in ways they didn’t anticipate. 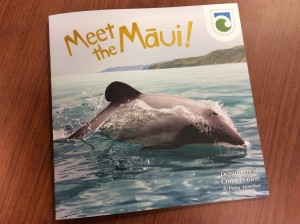 Seniors Jessica Caccioppoli, Lindsay Gotts, Lukas Hunker, and Guy Scuderi  worked to help the project’s sponsor, the New Zealand Department of Conservation, with their efforts to educate people about the dolphins’ plight.

The students knew raising awareness to help protect a nearly extinct species was meaningful, but they never expected the cultural impact their work would have. Seeing the complex and interrelated issues of environment and human brought home everything an IQP should.

The students were tasked with raising awareness of the Māui dolphin, the smallest and rarest dolphin the world, which exists only on the west coast of the North Island of New Zealand. Their primary project was compiling Meet the Māui, a colorful educational book about the Māui dolphin that is distributed to school children and at promotional events. The students spent weeks preparing for the project, studying the dolphin, the area, and conservation efforts, but it all came together when they arrived.

“When we were in New Zealand, we got to travel to Raglan and talk to people who shared their stories,” says Gotts. They learned the dolphins are important to the people, but through the stories and tales, the students were given a glimpse into the integral part the dolphins play in the culture of the people indigenous to the area.

The students learned how deeply the dolphin was ingrained in the cultural fabric when they heard the long-running stories of how the Māui dolphin are believed to have brought the indigenous people over to the area. As a result, the people regard them as higher than humans.

“The indigenous Maori see the dolphin as part of themselves,” says Scuderi. “They have such a strong cultural connection to the dolphin.”

Seeing the human/dolphin tie was instrumental in understanding how the project could have both environmental and cultural impact. “We didn’t know what to expect when we got there,” says Scuderi. “We knew they really cared about the dolphins, but we didn’t understand how strong the connection was.” Caccioppoli agrees. “We had never seen anything like that before,” she says. 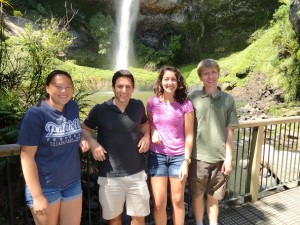 But with such strong feelings, there runs discord as well about the issues around the dolphins’ fate. The students, says Mike Elmes, project center director and Foisie School of Business professor, showed exceptional diplomacy and sensitivity by listening so carefully to the concerns and beliefs presented to them.

“In this case there were many partners and stakeholders (members of the Raglan community, local Maori, local fishermen, New Zealand Department of Conservation, environmentalists, seabed mining interests, and others) around the issue of declining Māui dolphin numbers,” says Elmes, “and, as you can imagine, a significant of range of views around the causes and solutions to the problem, many of which were in disagreement. The students got this, I believe.” 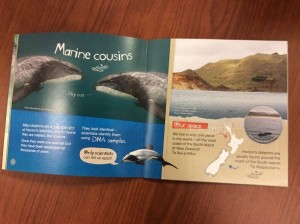 Hearing such open and moving stories about the culture, conservation, and what the dolphins mean to the people really impacted the students. “Conservation is more of their culture down there,” says Hunker. “People wanted to talk and share their stories. It was really interesting to see such a different view.”

The cultural understanding is right on target, says Elmes. “I want to see that they have learned something useful and important about the complex social dimensions of society/science/technological problems that exist in the world and the important tools that the social sciences can offer in understanding and responding to these complex problems,” he says.

Elmes also points to the unique qualities of this IQP that blended a complex problem, a pressing environmental and conservation concern, and a group of very passionate local people working with a group of outsiders from another culture and country. “As engineering and science majors, I am not sure where else they would get this kind of experience,” Elmes says. “Hopefully this experience provides our students with some foundation for how they might navigate these waters in the future and respond to others in ways that are respectful, nuanced, and constructive.”

All the students said the experience was transformative. “I almost didn’t come back,” jokes Scuderi. “I fell in love with the people and the culture.” Caccioppoli agrees. “I had a newfound respect for indigenous cultures,” she says. “Hearing their struggles and what they believe in … it opened my eyes to what other people care about.”