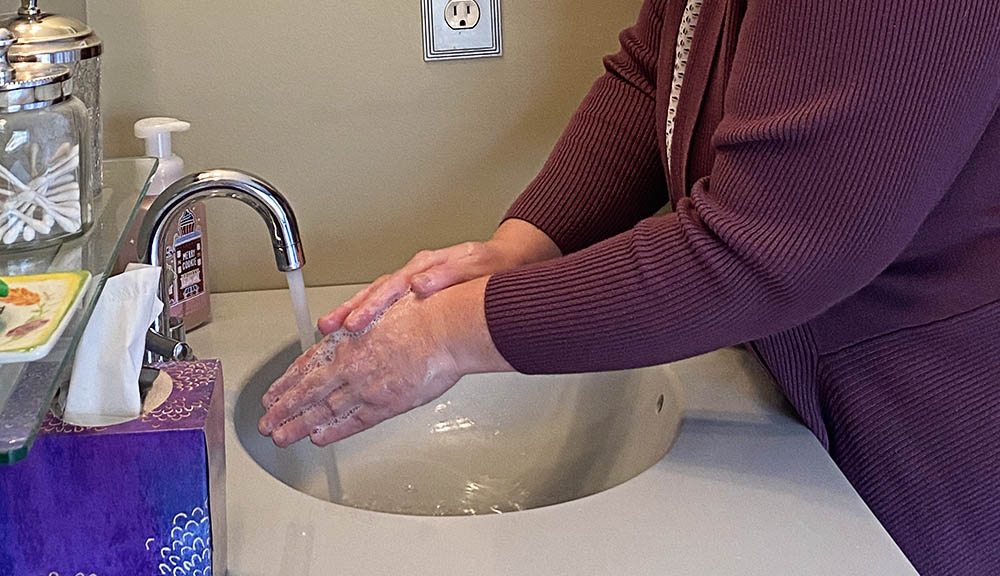 WPI's Sue Roberts says washing with simple soap and water is one of our best weapons against the coronavirus.

Why “Soap is Magic” in the Fight Against the Coronavirus

Remember how your mother always told you to wash your hands? Well, now she’s being backed up by scientists at the Centers for Disease Control and Prevention, and the World Health Organization.

They all say (likely your mother included) that washing your hands is one of the best weapons against the COVID-19 pandemic. As health and government officials warn the public to practice social distancing, stay at home as much as possible, and avoid touching your face, they’re also driving home the point that washing your hands for at least 20 seconds with soap and water is one of the best things you can do.

Health officials say to make sure you're washing your hands long enough to sing the Happy Birthday song twice. WPI's Sue Roberts has her own plan -- sing the WPI Fight Song. (See video below).

But soap and water? In a time when we have technologies like super computers, artificial intelligence, and nanobots, why are we relying so heavily on something that is thought to have been created in 2800 B.C. in ancient Babylon?

“This isn’t a new discovery,” he said. “We’ve long known that soap is the best thing you can use to stay healthy. It’s why medical professionals highly recommend washing your hands with soap and water during cold and flu season. The coronavirus is different than the flu but soap is something that works for all of it. Soap is totally a magic molecule. I don’t know if we could make something with all our technology today that works as well as soap.”

OK, we know we need to use soap but the question is why—why is something so common, inexpensive and old-school so powerful? According to Young and Sue Roberts, professor and head of the Department of Chemical Engineering, it’s the dual nature of soap that makes it so effective.

Soap is made by mixing fats (like coconut or palm oils, or even lard and rendered beef fat) and oils with a base like lye. The chemical engineers explained that it makes an interesting molecule with two different parts. One end of the molecule is hydrophobic, meaning it’s repelled by or doesn’t mix with water, and is attracted to fats. The other end of the molecule is hydrophilic, meaning it’s attracted to and mixes well with water, while being repelled by fats and proteins.

It’s much the same with the coronavirus.

The virus molecule has a protective shell, called a capsid, that is made up of proteins and lipids, which are fats. That shell not only protects the virus but the proteins in the capsid enable the virus to penetrate the membrane of a living cell in the body so it can replicate and spread.

“The virus molecules hijack your normal cell system that is trying to keep you healthy,” says Roberts. “It hijacks your cells and uses them as a production facility, making more virus and making you sick.”

When soap encounters the virus, the part of the soap molecule that is attracted to fat pushes into the virus’ capsid (the protective shell of fat and proteins, which isn’t all that strong) and breaks it apart. When the soap breaks open the capsid, the virus’ genetic material is left unprotected. The virus cannot invade a living cell and replicate once its capsid is smashed open.

Health officials recommend people wash their hands for at least 20 seconds because that’s how long it takes the soap to do its job against the virus.

Roberts noted that there are a lot of grooves and folds on your hands, so the virus has a lot of places to settle into. However, it doesn’t infect you simply by being on your hands; it needs to use a living cell to replicate, and the outer layer of skin on your hands is dead. The infection occurs when you touch your eyes or mouth and the virus enters the mucous membranes in your throat, traveling down your respiratory tract, and begins to spread.

And while hand sanitizer is good when people are on the go, it’s not as effective as washing with soap and water. Hand sanitizer, like soap, has hydrophobic and hydrophilic parts, but the hydrophobic end of its molecule is not as big, so it doesn’t do as good a job at busting open the virus’s protective shell.

Young pointed out that you don’t need fancy soap, pretty smelling soap, and especially not anti-bacterial soap to defend yourself against the coronavirus.

“Any kind of soap will work,” he said. “Just use soap. The magic of soap is in the soap molecule itself. It’s not about any additives. You can use a soap that smells nice or one that doesn’t. It doesn’t matter. It’s all effective.”