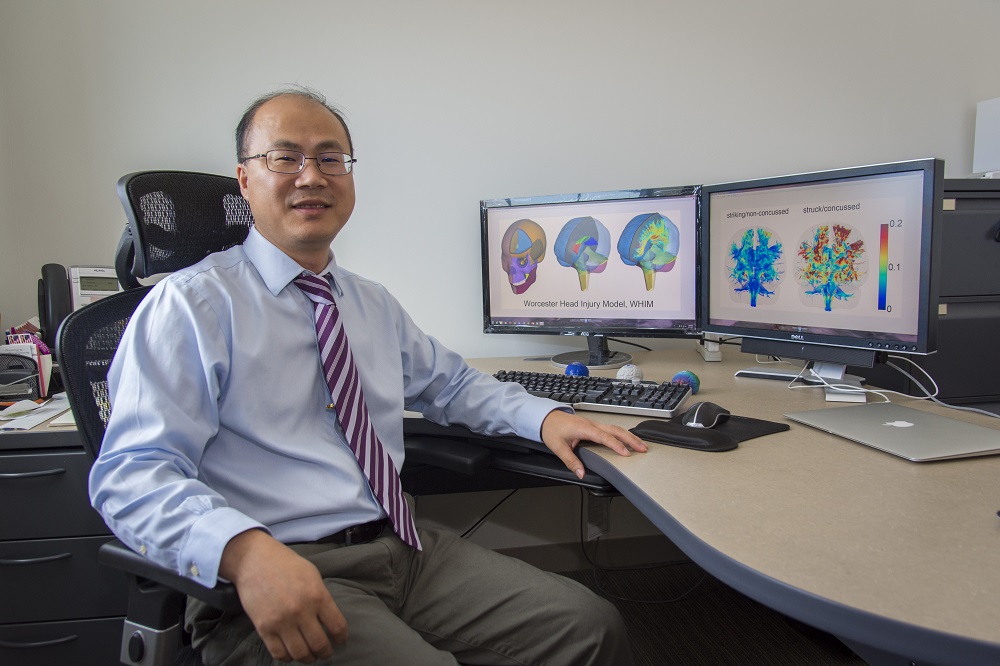 As fall sports seasons get under way and concerns related to concussions in contact sports continue to grow, a Worcester Polytechnic Institute (WPI) biomedical engineering professor is developing better tools to understand the mechanics of traumatic brain injuries in athletes.

With two grants from the National Institutes of Health, Songbai Ji is using advanced neuroimaging to develop highly specific computer models of the head and brain to better diagnose concussions in real time.

Ji, whose research integrates neuroimaging into existing brain injury research, focuses on how injuries affect functionally important neural pathways and specific areas of the brain. While there are numerous studies that essentially view the brain as a single unit to determine injury, Ji says, certain components like white matter neural tracts (tissue that helps coordinate communication between different regions of the brain) deep within the brain are more vulnerable and thus may be better indicators of injury.

“Typically it would take hours to produce a detailed strain map for each impact to determine if someone has a concussion,” said Ji. “But we are developing a model simulation in real time.”

Sports concussions have been a growing concern for years. According to the most current data from the Centers for Disease Control and Prevention, in 2012, nearly 330,000 children aged 19 or younger were treated in emergency rooms across the United States for sports and recreation-related injuries that included a diagnosis of concussion or traumatic brain injury.

Ji envisions that, in the future, an athlete on the field could be wearing protective gear, such as a helmet or mouthguard, equipped with an impact sensor. When an athlete’s head is struck, the sensor would record the acceleration, which would provide input to the computer model.

Because Ji will have pre-computed various strain maps into a computer, athletic trainers could quickly retrieve a strain map of the blow that could be used to assess injury risk.

“But the computational cost is now too high for real-world applications,” Ji said, “and that’s why we are also developing a real-time simulation technique.”

Ji added that many current concussion studies are looking at acceleration magnitudes, much like a “hit count” – the number of times an athlete’s head has been hit – rather than considering how many times a specific brain region experiences a certain level of strain and deformation, which is likely more related to the extent of the actual injury. Ji’s lab is looking at the role such repeated straining plays in the severity of concussions.

In a recently published paper in Biomechanics and Modeling in Mechanobiology, Ji and his research associates found that, in addition to the findings about deep white matter, a rigorous cross-validation of injury prediction performance has been lacking in brain injury studies. They proposed a general framework to address this issue in future studies.

“I am very encouraged by the research and think that we can make an impact in this crucial health area,” Ji says. “My research team understands just how important it is to advance concussion research for athletes of both genders and of all ages.”