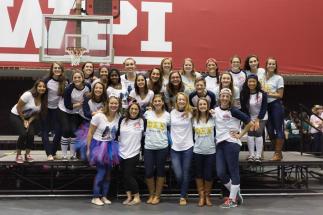 For the fourth time in five years, the Panhellenic Council at Worcester Polytechnic Institute (WPI) has received the College Panhellenic Excellence Award from the National Panhellenic Conference (NPC), one of the nation's largest advocacy organizations for sororities.

WPI, which hosts six sororities, previously won the award in 2013, 2015, and 2016. This year, the university was one of 20 colleges to receive the honor, out of the more than 600 colleges and universities across the United States and Canada that belong to NPC.

NPC, which has recognized student-managed college Panhellenic councils with awards of excellence and achievement for more than 50 years, selects only the top scoring councils for recognition each year. Scores are based on seven criteria, including academics, programming, and community relations.

“The Worcester Polytechnic Institute College Panhellenic (CPH) is an example of an award- winning CPH that does not stand on its previous accomplishments,” said Patty Gesell, College Panhellenics Committee chairman and area advisor to WPI. “The women continue to challenge themselves in all areas and are not satisfied with the status quo. Whether they are evaluating and refining recruitment, looking at ways to support and acknowledge academic excellence, or supporting issues of importance to women, their positive impact extends beyond the organization to the campus and Worcester community.”

Sorority members are also involved in a number of leadership positions and groups on campus, including Student Government Association Community and Residential Advisors, Crimson Key Tour Guides, and Student Alumni Society (SAS), as well as club and varsity sports teams.

“WPI Panhellenic Council has been successful in creating programming to support the mission and vision of the NPC within an affinity space that focuses specifically on women’s support and success in higher education,” said Christine Kobza, associate director of student activities at WPI. "For the council to be recognized consistently over the past five years shows a commitment on behalf of the undergraduate women to support excellence of programming as well as strong partnerships with the university, their national organization, and the National Panhellenic Conference. They are truly showing excellence as a women’s Greek community.”

Abigail King, president of WPI's Panhellenic Council, said her peers were gratified to receive the award.

“The women who serve on the Panhellenic Council are honored and humbled to receive this prestigious award,” said King. “It is the outstanding efforts of all the undergraduate sorority women on campus that inspire the hard work, sincerity, and dedication required to be worthy of the College Panhellenic Excellence Award. The support of both the Panhellenic community and our advisors push us to provide valuable programming, campus relations, and recruitment to the women of the WPI community.”

In addition to the overall excellence award, WPI’s Chi Omega, Alpha Phi, Phi Sigma Sigma, Alpha Xi Delta, and Alpha Gamma Delta received individual national chapter awards for advising support, chapter excellence, academic achievement, recruitment, and philanthropy. The Panhellenic Council (Excellence in Civic Engagement) and Phi Sigma Sigma (Excellence in Membership Recruitment Practices) were recognized with an award at the Northeast Greek Leadership Association (NGLA) Annual Conference, an organization that works to support the co-curricular learning experiences for fraternities and sororities in the northeast. Helen Vassallo, professor of business, was recognized at NGLA with the Guenzler Award for her work with Phi Sigma Sigma. The award is given to an individual who volunteers in the fraternity/sorority community as a faculty advisor.