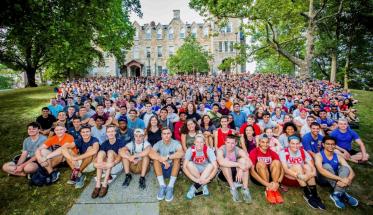 Worcester Polytechnic Institute (WPI) welcomes the Class of 2021, the most gender-balanced class in its history. Among the 1,130 new students, 44 percent are women—an increase of 10 percentage points over last year’s class—placing WPI among STEM institutions with the highest percentage of female students.

“Women bring diverse points of view, skills, and problem solving abilities to STEM, and higher educational institutions must do everything in our power to ensure these talented women have the same access to great technological education as male students do,” said President Laurie Leshin. “WPI is committed to being a positive force in diversity and inclusion in STEM, positioning as many talented students as possible to have a tangible impact on the world around them.”

“WPI has been diligent in our efforts to help more young women see themselves as scientists and engineers, and to foster an environment on campus where they can thrive,” said Kristin Tichenor, WPI senior vice president. “Those investments are now beginning to pay off – not just for WPI, but for the women who will go on to partake in important and rewarding careers, and for the companies who are eager for their talents and perspectives. Watching this vision launch into a reality makes for an exciting time here at WPI.”

The university has developed several pre-collegiate pipeline and outreach programs strategically focused on attracting girls (particularly middle school and high school girls) to STEM fields and keeping them engaged through to the college application process. In 2016 WPI announced a partnership with Girls Who Code (GWC), a national nonprofit organization working to close the gender gap in computer science through after-school and summer immersion programs. The WPI/GWC Alumni Scholarship Program provides scholarships to five young women—alumnae of Girls Who Code programs—who will each receive $20,000 per year for their four years of undergraduate studies at WPI.

“We’re very excited about the Class of 2021 and the exceptional academic talent they bring to campus,” said Andrew Palumbo, dean of admissions and financial aid. “High-achieving students from all over the world are attracted to WPI’s distinctive education that combines theory and practice. The diverse skills and experiences they are bringing into our classrooms, internships, co-ops, and our global project centers will benefit our campus and communities around the world.”

Students in the Class of 2021 were selected from a highly competitive pool of applicants and are extraordinarily accomplished: 50 percent graduated from high school with 4.0 GPAs (the class average is 3.86) and 76 students were their class valedictorian or salutatorian. Students come from 40 states (including 462 students from Massachusetts), the District of Columbia, Puerto Rico, and the US Virgin Islands; nine percent of the class is international, representing 38 countries. Fifteen percent of the incoming class are first-generation students—the first in their families to attend college.

Among the incoming class are individuals who …

The first day of classes for all students is Thursday, August 24.