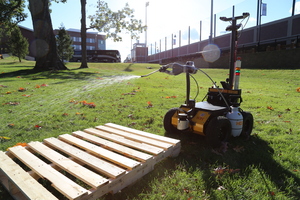 Scientists are proposing an intriguing solution to help protect health care workers on the front lines of the Ebola outbreak and fight the spread of the highly contagious disease: robots.

With today’s robotic technology – already deployed in many medical setting across the country -- experts say robots could be programmed to handle waste removal, decontamination, telepresence, surveillance, and other human tasks associated with a high risk of disease transmission. So real is this possibility that scientists, with the support of the White House Office of Science and Technology Policy, are planning a series of brainstorming meetings to explore the role of robotics and other technologies in the Ebola crisis. WPI is one of only four locations across the country selected to host one of the first round of workshops on Nov. 7, which will include medical responders and academic researchers, as well as commercial robotics companies.

In an interview with The New York Times, Taskin Padir, assistant professor of robotics at WPI, says he has been working to repurpose AERO -- an existing WPI robot used in other robotics events – to safely perform decontamination tasks, such as spraying bleach solution on clothing exposed to infected body fluids and sterilizing facilities.

Another possibility, he told Computerworld, is to set up a telepresence robot that would allow health care workers to see and interact with patients from the safety of a remote location, while also providing patients in quarantine with some form of human contact. Such robots may also be useful with language interpretation.

However, Padir cautions that the goal is not to eliminate or replace human workers and caregivers. “We’re trying to empower them, we’re trying to give them new tools to minimize contact and interaction [with infected patients],” he explained to BBC World.