WPI has move-in day down to a science

With the speed of a rocket and the precision of a robot, Residential Services settled about 680 first-year students and 400 early arrivals into their rooms last Sunday. 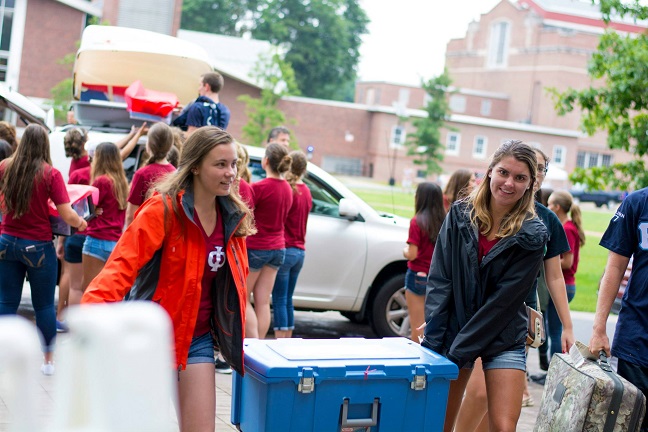 Greek volunteers move everything out of
students’ cars and into their rooms.

“I think WPI has our move-in process down to a science,” says Emily Balcom, assistant dean and director of Residential Services. “I’ve worked at seven colleges and I’ve never seen a move-in day go as quickly and smoothly and be as celebratory as this one.”

The smooth logistics are the product of advance planning, campus-wide cooperation, and on-the-fly adjustments, says Balcom. An example of the latter: when cars lined up well before the official 9 a.m. check-in time Sunday, the residence staff opened the gates at 8:15 to keep families from waiting and to clear the streets surrounding the university. By 9, some 150 students had moved in, she says.

Most every department and office on campus, from the registrar and financial aid to facilities and health services, plays a role, she says. “It’s all hands on deck.”

Many of those hands come from the WPI fraternity and sorority houses. For many years, representatives from each of the Greek houses have donned their lettered T-shirts and unloaded vehicles, swiftly carrying lamps, bedding, and totems from home into the new students’ rooms.

“The families pull up and the Greek volunteers move everything out of the car and into the room in a minute and a half, flat. The parents and new students don’t have to lift a thing.” – Emily Balcom

The Greek community’s involvement is an ongoing tradition that not only makes the move-in easy and fun, but serves to dispel common misconceptions and stereotypes about Greek life, says Balcom. “It’s a way of recruiting and also associating Greeks on the WPI campus with positive actions.”

Move-in Day planning actually begins at the end of the previous school year, when Jim McLaughlin, assistant dean of student programs and director of the New Student Orientation program, gathers everyone together to review the previous year’s move-in.

They make note of what went well and what areas might need improvement, from car traffic patterns to the schedule of events, Balcom says. Case in point: The residence hall staff used to stay at the check-in point until 2 p.m., but the data showed fewer than 20 students checked in after 12:30. So they adjusted the hours and put more staff on earlier. 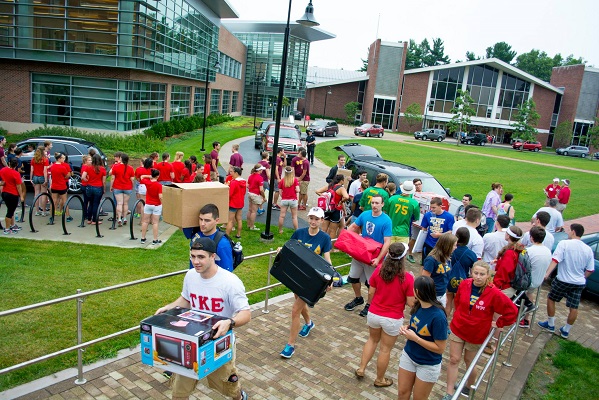 The Greek community’s involvement is an
ongoing tradition that makes the move-in
easy and fun.

The ever-increasing number of early arrivals—students who must move onto campus before the official date to attend athletic or pep band practices, or because of personal scheduling conflicts—often has the orientation and residence hall staffs considering changing the next year’s move-in date to better fit families’ and students’ schedules.

The group meets again about a week before the big day to make sure everything is ready and to go over last-minute changes. This year, for example, with more first-years registering than anticipated, Residential Services had to open 16 Elbridge and Founders Hall to house students. The Greek volunteers helped there, too, accompanying these families to the students’ new digs, and getting them settled. They also contributed to the overall festive atmosphere, says Balcom.

“The goal is to make everything as easy and stress-free as possible for parents during one of life’s biggest events,” she says. “This is the first time that parents get the sense that they’re moving their student into a real community. The cheering, everyone there to greet them—it really helps.”