WPI Rates as a 'College for 21st Century Einsteins' 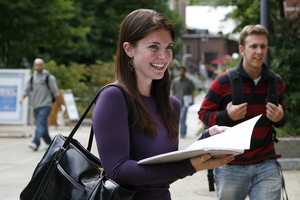 The Huffington Post recently featured WPI in an article highlighting Unigo’s "Colleges for 21st Century Einsteins," which lists the top 10 schools for science and technology - as rated by students.

The Unigo ranking uses only student surveys and interviews for their analysis. In this ranking, WPI is described as "a small private university that attracts some of the brightest young science and engineering students in the nation."

When completing their Unigo surveys, WPI students cited the university’s curriculum, their close working relationships with faculty, and WPI’s rigorous seven-week terms as distinguishing traits. WPI students also praised the university's excellent reputation within various industries. One of them said, "The people who matter—the ones who hire college grads—they DO know about WPI, and they hold it in very high esteem."