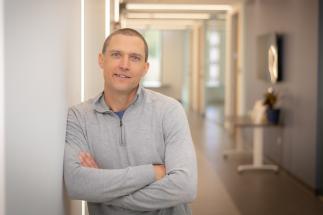 Worcester Polytechnic Institute (WPI) researcher Sam Walcott has received a $1,410,535 grant from the National Institutes of Health to develop a mathematical model to predict the amount of chemical energy that muscles need to contract, an advance that could lead to improved medical treatments and the creation of better prosthetic devices.

Walcott, an associate professor in the Department of Mathematical Sciences, will use molecular, cellular, and human movement measurements to develop differential equations that predict the amount of chemical energy that muscle cells and groups of muscles require to exert the mechanical force that propels walking, running, and other movements.

“Muscle contraction is a fundamental biological process that powers the heart, moves food through the gut, and enables us to walk and run,” Walcott said. “All of that movement requires chemical energy. The goal of this research is to connect our knowledge of energy use at the molecular level to the pumping of the heart muscle or the movement of a leg muscle.”

Muscle contraction starts with molecular interactions that cause the relative sliding of two different types of protein filaments, one containing the protein actin and the other containing the protein myosin. The sliding initiates contraction at the cellular level; contracting cells and whole muscles work together to produce movement. Walcott, who is principal investigator (PI) on the four-year project, previously developed a model describing muscle contraction at the molecular level. His research has been used in drug and cellular research.

The researchers will use a combination of laboratory and human experiments, along with mathematical modeling, to extend Walcott’s previous research. They will characterize interactions between molecules that are involved in muscle contraction, perform experiments with muscle cells under conditions that replicate contraction, and then test and refine models by measuring the energy consumed by human volunteers who will move their feet, legs, and arms.

“Advances in molecular science over the last two decades have expanded our understanding of energy use at the tiniest scale,” Walcott said. “Now we want to take that knowledge and make predictions at larger scales so we can improve human health.”