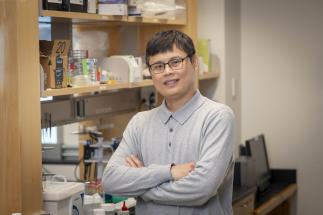 CAREER Award for Kun-Ta Wu to Expand Understanding of Microfluidics

Worcester Polytechnic Institute (WPI) researcher Kun-Ta Wu has received a $520,895 CAREER Award from the National Science Foundation (NSF) to characterize and model how tiny amounts of “active” fluids move and flow while mixing together on their own.

Wu, an assistant professor of physics, will describe how active fluid can overcome the limitations of traditional mixing systems. His five-year project could have implications for the miniaturization of industrial processes and greater efficiency in fields such as chemical, biological, and pharmaceutical engineering.

“Some industrial processes use heat or stirrers to mix different fluids, but these interventions may not be effective in microfluidic processes, such as those used to mix ink for color printing or those involved in drug development,” said Wu. “We know active fluids can spontaneously generate their own turbulence to promote mixing, but our understanding about this mixing is limited. As such, we want to characterize the mixing dynamics of active fluid, as well as develop a model to describe the mixing and understand its working principles, so we can control how it mixes, when it mixes, and what it mixes.”

Active fluids are soft materials containing molecules, cells, or other components that can convert chemical energy into movement. Mixing involves the repeated stretching and folding of materials. In a passive fluid, heat or other forces promote mixing. In an active fluid, however, components consume energy, move, and can even carry other components as cargo without external intervention.

Wu studies mixing in active fluids composed of the kinesin motor protein and cylindrical molecules known as microtubules. By consuming the adenosine triphosphate (ATP), kinesin can “walk” along microtubules, which causes the tiny tubes to move, break, and generate stirring.

“One of the challenges with active fluids at microscopic levels is that once mixing starts, we have no control over it,” Wu said. “Our goal is to be able to shine an ultraviolet light on a fluid to stop mixing or resume it by applying a visible light.”

In addition, Wu will create educational activities about mixing and active fluids for students in kindergarten through 12th grade and for high-school teachers. For undergraduate students in physics courses at WPI, Wu will create educational modules about active matter. He will make the modules available to teachers in the United States through the American Association of Physics Teachers Partnership for Integration of Computation into Undergraduate Physics (PICUP) online platform.

CAREER Awards are prestigious grants that support researchers in the early phases of their careers as scholars and teachers. Wu, who earned his PhD in physics at New York University, joined the WPI faculty in 2017.