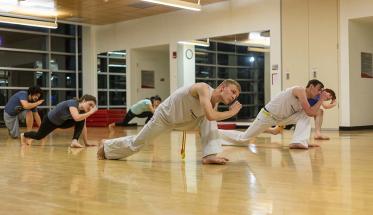 WPI’s Got What? … Society of Martial Artists

Let’s get it out of the way now: regular old kung-fu fighting is so 1974. Just ask WPI’s Society of Martial Artists, or SOMA.

Every week, group members come together to learn and practice three different martial arts styles interchangeably—Aikido, Capoeira, and REaCT—to perfect their skills and meet new friends (not to mention earn PE credit for the first semester of every year). 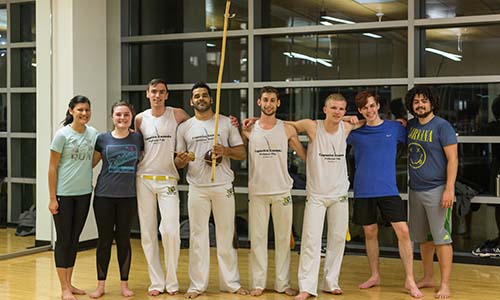 While Aikido (a modern Japanese martial art where fighters use their opponents’ bodies against them) and Capoeira (an Afro-Brazilian dance/martial art combination that mixes acrobatics with kicks, dodges, and other martial arts basics) have roots in traditional martial arts, REaCT (Reality Endurance and Combat Training) is a mixed martial art that’s divided into three phases: stand-up fighting, tosses from standing to the ground, and groundwork. More than that, though, “It’s a great stress reliever and a way to keep active during the school year.”

So says SOMA president Claire Nicolas ’22, who, although she broke her ankle in her first term on campus and wasn’t medically cleared to participate until C-Term that year, cites the club as one of the reasons she decided to attend WPI in the first place. “Not many colleges offer a system where you can learn different martial arts all while being part of the same club,” she explains.

It’s also helped Nicolas with the transition from high school to college, using meeting times as both a de-stresser (particularly helpful around finals week, we’re sure) and a way to meet new friends in an already-bustling campus community.

Topics
Community & Culture
|
Clubs & Organizations
|
WPI's Got What?
DEPARTMENT(S)
Student Activities
There’s a high amount of trust and respect found between martial artists due to the nature of close-contact sports. This often leads to great friendships and a general feeling of support from the people around you.

With several different training tracks and so much going on in a single club that had a special place in her heart from the start, it may be difficult to pin down a single favorite thing about SOMA, but for Nicolas, the answer’s easy.

“The family that comes along with it,” she says simply. “There’s a high amount of trust and respect found between martial artists due to the nature of close-contact sports. This often leads to great friendships and a general feeling of support from the people around you.”

The SOMA crew regularly hosts stress reliever sessions and social events throughout the academic year, but their biggest event of the year will be held during the weekend of February 8, where world-renowned Aikido master and founder of the Eurasia Aikido Organization Nebi Sensei will host an Aikido seminar.

Although martial arts might seem intimidating, especially to beginners, SOMA is open to all, regardless of experience level, as a place to stay active and have fun. Nicolas sums up the atmosphere best by commenting on the style of the person responsible for her favorite portrayals of martial arts in pop culture, Jackie Chan:

“...his movies break the stereotype of martial artists being tough and stoic,” she says. “We really are just a bunch of softies with a love for adrenaline rushes!”

The "WPI's Got What?" series highlights the variety of clubs and organizations at WPI. From the LEGO Club to the Society of Magicians, check out other clubs that have been profiled.