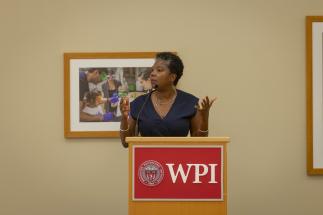 Suzanne L. Weekes, professor in the mathematical sciences department at Worcester Polytechnic Institute (WPI), has received the prestigious Deborah and Franklin Tepper Haimo Award for Distinguished College or University Teaching of Mathematics from the Mathematical Association of America.

The award, established in 1991, is given to college or university teachers widely considered to be “extraordinarily successful” and whose influence reaches beyond their own school. Each year up to three professors are honored with this award. This year the association, which is the world’s largest community of mathematicians and students, also honored mathematicians from San Francisco State University and the University of Houston.

In honoring Weekes, who has taught at WPI for 20 years and also is interim associate dean of undergraduate studies, the association noted her superlative work teaching, advising, and mentoring students and faculty at WPI, as well as regionally and nationally. She received the award at the Joint Mathematics Meetings, the largest mathematics meeting in the world, which will be held in Denver, Colo. Weekes was honored last year by the Association for Women in Mathematics with the Humphreys Award for Mentoring.

“I am honored and humbled to have been nominated and selected for this award,” said Weekes. “I am fortunate and thankful to work with and learn from collaborators, students, mentors, and leadership with adventurous, creative, and inspiring spirits.”

Weekes also was recently elected to the executive committee of the Association for Women in Mathematics, a nearly 50-year-old nonprofit organization focused on influencing the culture, visibility and presence of women in mathematics. The WPI professor also was recently named to the council of the Society for Industrial and Applied Mathematics (SIAM), the world’s largest  professional society dedicated to computational science and applied mathematics. As a member of the council, Weekes will help formulate SIAM’s scientific policy, monitor and propose technical activities, and recommend action to the board.

A substantial part of this collection contains information on candidates for the Admiral Ralph Earle Award. Much of the rest of the collection is comprised of financial records. There are also many WES Bulletins (newsletter), as well as meeting minutes, news clippings, and other materials related to the history and operation of the WES.

With her position as Associate Dean of Undergraduate Studies, ad interim, which she took on in July 2019, Weekes is focusing on WPI undergraduate research programs and opportunities to increase the impact of student project work.

Weekes is co-founder and co-director of the nationwide Preparation for Industrial Careers in Mathematical Sciences—or PIC Math program. As part of the program, she has worked with faculty from more than 130 universities, mentoring them in how to make industry connections to provide research experiences for students to work on problems coming directly from business, industry, or government. More than 1,500 students have taken PIC Math courses at their universities, doing project work and learning about mathematics career options outside of academia.

Weekes also served as associate head of WPI’s math department for six years and has been co-director of the Mathematical Sciences Research Institute Undergraduate Program, a Berkeley, California-based effort to increase the number of undergraduate math students from underrepresented groups who go on to graduate school.