WPI Students Continue To Be in High Demand 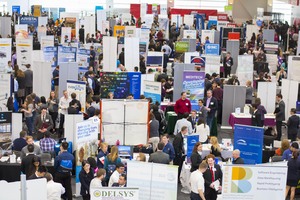 More than 180 employers and over 2,300 students
and alumni participated in the Spring Career Fair
on February 18.

WPI’s Spring Career Fair drew over 180 employers and more than 2,300 students and alumni to campus on February 18. A diverse mix of companies ranging from government contractors and online retailers to local start-ups and global financial services providers were on hand looking to hire full-time employees or fill internship or co-op positions.

Many of the employers in attendance cited the ability of WPI students and alumni to work effectively in teams, think creatively, and dive right into the workplace.

Scott Dresser ’89 of Amazon Robotics, a Career Development Center bronze sponsor, was working the booth for his fourth year. He said WPI students have the technical know-how along with the project and team experience that quickly gets them up to speed in the work environment.

Joe Smith, a senior technical recruiter with Dassault Systèmes, which took on six WPI students as interns last year, also noted that WPI students have a “tier-one mindset” and are “ambitious to get experience.”

Deven Heroux, a human resources and recruiting manager at EPM, a Career Development Center bronze sponsor, praised WPI students for being well-prepared at the Career Fair. “WPI students don’t just throw a resume at us, they know about our company and are ready to talk,” she said.

Several companies made their Career Fair debut this year, including Facebook and Johnson & Johnson. Nicole Hayward ’10 (mechanical engineering), a manufacturing engineer with DePuy Synthes, a Johnson & Johnson company, said Johnson & Johnson is looking to branch out to new schools for its co-op program. Hayward and other alumni advocated for WPI and now they are starting to do a lot more recruiting at the university.

“The experience of the students and the positive feedback from employers is proof positive that our students are in high demand,” said Steve Koppi, executive director of the Career Development Center. “We’re thrilled the Career Fair gives both employers and our students an opportunity to network and get to know each other.”

Networking is what Thomas Washburn ’16 (civil engineering), '17 (fire protection engineering) had in mind going into the Career Fair. “I’ve had good internships, and being able to relate to the companies I was talking to gave me a real promising outlook. I’m using this fair to network and branch out,” he said.

Michael Inserra ’17 (electrical and computer engineering) found the experience rewarding. “Initially I was stressed, but it went way better than I expected. I focused on military and defense contractors and there is a huge market for electrical engineers out there. [One company] said they would contact me for an interview.”