Grotesques on Alumni Gym will be removed and preserved 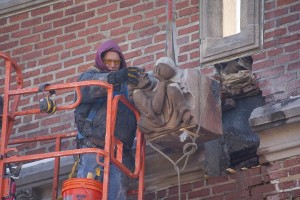 Michael Kearns ‘98 first came to WPI as a visiting high school senior who was eager to learn more about the cross country team. He met with the coaches in Alumni Gymnasium, and that meeting helped him decide that the university was where he wanted to be. Little did he realize how important that meeting would turn out to be—for reasons having more to do with Alumni Gym itself than with running.

Kearns now works as a project executive and regional director for Shawmut Design and Construction, the company managing the demolition of Alumni Gym and the construction of the Foisie Innovation Studio and Residence Hall. The company has worked on other projects on campus, including the multi-phased renovation of Harrington Auditorium.

The decision to construct a new building—the Foisie Innovation Studio and Residence Hall—came after 10 years of study into the feasibility of renovating or repurposing Alumni Gym. The university trustees ultimately decided that it would be more efficient to build a new and larger high-use building. The building will have two floors of academic innovation/project work space and three floors of residential space and is expected to open in late 2018.

But before the new building can go up, the old must come down—and before that happens, WPI has been making a significant effort to preserve the cherished grotesques, 34 pieces of distinctive art that are placed around the building’s frieze. (See the removal of a grotesque and an explanation of the process here.) Grotesques are distorted caricatures that have been used as decorations on buildings in Europe since about 1500 AD. They are often romantic figures used as empathetic characters in literature. They differ from gargoyles in that grotesques do not spout water away from the roof. 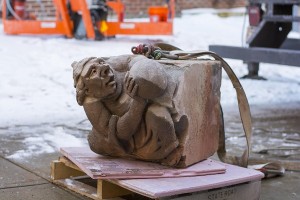 The structural integrity of the 100-year-old carved limestone pieces was in question, so it was not known if they would get damaged or destroyed during the removal process, according to Fred DiMauro, assistant vice president of facilities. In addition, the original building construction drawings were not detailed enough to show the system used for anchoring the grotesques to the building, presenting a possible additional challenge.

Mapping the figures in 3-D

Facing the possibility that the grotesques might get damaged, WPI hired Existing Conditions Surveys to map the surface contours of each grotesque, using hand-held laser scanners to digitally preserve their outlines in order to create 3-D images that could be used to replicate the figures, if needed. Brian Ely, the company’s senior project manager, says the technology has been used to record projects ranging from artifacts in the Smithsonian Institution to the interiors of the Massachusetts Senate building, and even entire buildings.

Ely and colleagues found that most of Alumni Gym’s grotesques were in remarkably good condition for their age—aside from a chip here or a missing finger or two there, they were generally free of the damage often seen in limestone figures exposed to the elements for decades. 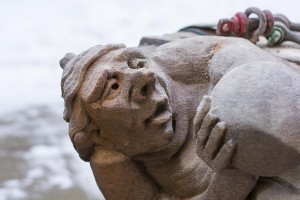 Once all the figures were scanned, masons carefully removed one from its perch as a test, using concrete saws, drills, shims, and a large crane to lift the 500 lb. carving to the ground. The process went as smoothly as could be hoped—boding well for the eventual removal of the remaining 33 figures. Their future use on campus is not yet fully decided, but current architectural renderings suggest a space for them along an outside corridor that will exist between Harrington Auditorium and the new building.  Additional ideas are being considered, as well.

The eventual demolition of Alumni Gymnasium and the creation of the new Foisie Innovation Studio and Residence Hall—as well as interesting projects along the way, like salvaging the grotesques—provide exciting opportunities for WPI’s community. As a WPI alum—and as someone who has taught graduate-level courses and supervised MQP teams—Kearns is excited by the potential opportunities to involve students in the project, and says that Shawmut plans to work with the Department of Civil Engineering.

“The rare opportunity to create a building on the Quad is a once-in-a-lifetime thing,” Kearns says.  “It’s a personal privilege … a personal point of pride.”

The same thing might have been said by another alum, 100 years Kearns’s senior: Edwin H. Brown, Class of 1898, was a partner in the architectural firm Hewitt & Brown, designers of Alumni Gym, and very likely felt the same way.