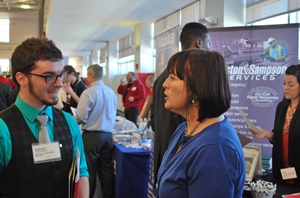 Worcester Polytechnic Institute (WPI) drew a record number of students to its Spring 2013 Summer Internship & Job Fair, with approximately 2,000 undergraduate and graduate students and alumni meeting with recruiters from 175 companies.

Some employers will remain on campus during the next few weeks to conduct follow-up interviews with student applicants.

"We have companies that cover our traditional majors, as well as our newer majors, such as Bioinformatics, Architectural Engineering, Robotics Engineering and Interactive Media & Game Development, just to name a couple," said David Ortendahl, associate director of employer relations for WPI's Career Development Center, which organized the job fair.

Ortendahl said that employers appreciate the level of preparedness of WPI students.

"That's both academically, in terms of the project-based curriculum and the challenges that they've faced," he continued. "But employers also respond to how they present themselves - the Career Development Center works closely with students to provide them with prep opportunities, resume critiques and other related programs. When they meet with employers, they are able – and well prepared - to showcase the best that WPI has to offer."

The Career Development Center helped prepare students for the fair by holding workshops on resume writing and how to do a job interview.

"We're always looking for electronics, mechanical, biomedical and chemical engineering majors, and we find that WPI is a great program," she said. "If the students don’t have much work experience, they always have some projects on their resume, and some great transferable skills that we can definitely utilize."

WPI sophomore Shane Fagan of Middletown, R.I. said he wanted to get an early start on his job search, and prepared by working with CDC counselors in honing his resume and cover letters.

"I interviewed with the five companies I wanted to, that pertain to my major," he said. "First, I went to the CDC website to see if any companies sparked my interest."

Last year, The Princeton Review rated WPI 17th in the nation for career services. Some 91 percent of undergraduate students reported utilizing the many services offered through the Career Development Center over the past year.

WPI ranks 15th in the nation for return on investment (Businessweek) with graduates landing well-paying positions, often from events like the university's career fairs. Their skills and ability also contribute to WPI graduates earning 27 percent higher starting salaries than the national average, as reported by the National Association of Colleges and Employers.