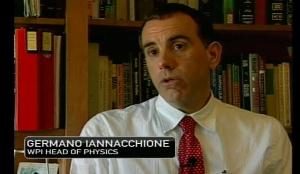 Lost in the hubbub over last week's Russian meteor blast and asteroid encounter is the reality that the United States has technology in place to combat such attacks.

That's the assessment of WPI Physics Department Head Germano Iannacchione, who said that there are several ways to knock an asteroid off-course—or even steer it, depending on what it’s made of—using existing space technology.

According to Iannacchione, a heat source—such as a plutonium thermopile—could be landed on one side of an asteroid that is covered with frozen water, ammonia, or carbon dioxide, evaporating the ice into space in a controlled way. Operating over a long enough time, the net reaction to this gentle thrust would be to deflect the asteroid.

A second possible way is to place a one- to two-ton, bus-sized object next to the asteroid, he said. The gravitational pull would move the asteroid ever so slightly, again over a long time, away from the Earth and out of harm's way.

The third— and perhaps most dramatic—means is to send a nuclear warhead into space to more persuasively nudge the asteroid, perhaps even destroying it. The net effect: converting what was once an instrument of destruction into a device that could save the planet.

"These are not science-fiction ideas," said Iannacchione. "We have the ability to use existing materials and technologies. We just have not tried them yet."

Iannacchione calls the twin cosmic events a "wake-up call". While he notes that the Earth is bombarded regularly with debris, most of it lands in the ocean as the Earth is 70 percent water. It is "exceedingly rare," he says, that a meteor event occurs in a populated area.

In the end, Iannacchione noted, scientists and researchers have the chance to put knowhow into action. It's all about dedicating the time to actively study the cosmos and prepare for the next big boom.

Not only could we literally save the planet, he said, "imagine 'parking' one of these mineral-rich asteroids in a stable orbit around the Earth," he said. The near-miss asteroid alone contained approximately $195 billion worth of ore and these are largely the materials needed to explore the solar system.

"The most amazing part of this story," Iannacchione said, "is that this is the first time in the history of the universe that any species has understood the cosmos and has the ability to change its course."