Julian Dano ’16 of WPI’s Zeta-Mu chapter of Tau Kappa Epsilon (also called “TKE” or “TEKE”) has been awarded TKE International’s “Top TEKE Award” for 2016. This annual award is the highest honor given by the organization to the top collegiate members of the fraternity. The winners have exemplified the cornerstone principles of the organization—Scholarship, Leadership, Teamwork, Service, and Brotherhood.

The good news doesn’t end there, however; fraternity advisor Caitlin Donlan and the Zeta Mu chapter each garnered recognition from the organization.

Dano, a graduate in Industrial Engineering, has been a past president and treasurer of the TKE chapter. He says that he was not a natural leader when he first came to WPI, and that he stretched his boundaries by having to face tough issues, run meetings with the Board of Directors and alumni, and generally act as the face of the fraternity. He says that the work with the fraternity system made him focus on daily service, and makes him “want to help as much as I can in the time that I have.” 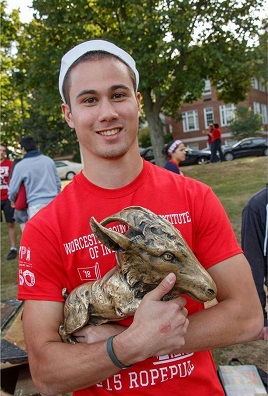 The Zeta-Mu chapter has also been given a Top TKE Chapter Award. It is designed to recognize chapters who epitomize TKE International’s credo of “Better Men for a Better World,” by having a well-rounded, successful chapter. In order to be eligible for this, the fraternity must qualify in four of six areas with awards of excellence: recruitment results, chapter size, community service, alumni relations, academic success, and extracurricular activities.

Under Dano’s leadership, the TKE chapter has continued its long legacy of service and philanthropy. The members help co-sponsor an annual event for the American Cancer Society Relay for Life, which supports cancer survivors. The members also work to raise funds for St. Jude’s Children’s Hospital. Every fall during TEKE Week, the fraternity sets up a “TEKE hut” on campus to solicit donations for the hospital, which provides free care to its patients. The hut is manned for a week by two members for 24 hours a day to spread awareness that children are suffering with their maladies all of the time.

Dano says that what makes the WPI Greek system different than most is that it draws from the people who are already in the pool. He says that WPI students are “strong academically, they are ambitious, and they are looking to do good in the world.” When these sorts of people are brought into the Greek system, they are introduced to a structure that supports and encourages good works. “The Greek system here works because WPI works.

He also credits Caitlin Donlan, fraternity advisor and Assistant Director of Student Activities for Programming and Greek Life, as a major contributor to that success. In this position, Donlan oversees the Interfraternity Council, co-hosts the Greek Leadership Institute and works with the Judicial Board to evaluate instances of fraternity misconduct. Dano calls her the TKE chapter’s “go-to advisor” for her exceptional willingness to answer difficult questions. “We couldn’t ask for a better Greek advisor,” he says with enthusiasm.

According to Donlan, both Dano’s and the chapter’s awards are in recognition of the “great work that the students are doing outside the classroom.” She says that through WPI’s co-curricular activities, many students in fraternities develop life skills that are not written on a syllabus, but that are crucial in making them successful in their careers. 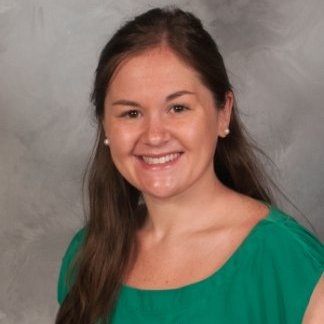 Donlan’s extensive experience with the Greek system has allowed her to share alternative risk management policies (which have been used successfully by other fraternities) with TKE leaders. The plans she helped implement concerning changes in philanthropy, education, and member quality have led to a brighter outlook for the future of the chapter.

And she has a strong belief in communication. Donlan says that open and honest communication among parties is the key to making the partnership between the campus administration, the alumni volunteers, and the student leaders work. She says that “open communication is how, and why, we are able to consistently evaluate our community and identify opportunities for growth.” Donlan practices these beliefs by going out of her way to support the fraternity in its endeavor to improve. She has met weekly with leaders of TKE, and has even made a point of having dinner with the members.

The individual attention that Donlan has given to the Zeta-Mu chapter has led to her being nominated for TKE International’s Greek Life Administrator of the Quarter for Fall 2016.

Dano is now working with two other WPI TKE graduates, encouraging nonprofit organizations in their individual missions through a crowd-funding type system. One of the tenets of the Top TEKE Award is that the winners “show others what it means to be a fraternity man.” He is certainly doing this by taking both his desire to help the community, and the skills he learned and practiced as a leader in the Zeta-Mu chapter, into the business world.