“There is no doubt that Greeks at Worcester Polytechnic Institute play a positive role in the campus at large,” the publication states. It identifies events such as the Greek Carnival, Greek Week, and community service projects, such as blood drives, as some of the ways chapters keep the campus abuzz with activities and good works. 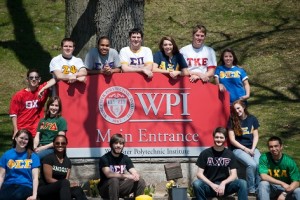 And the Greek spirit is not only alive and well, but growing at WPI. There are 13 fraternities and six sororities, says director of student activities Christine Girouard; two new sororities opened over the past few years, in 2011 and 2014, with the first chapter, Phi Sigma Sigma, starting on campus in 1977, she says.

Girouard herself has been learning about Greek Life as many new students do. At her undergraduate school, Salve Regina University in Newport, R.I., there were not any fraternities or sororities. “I didn’t know what to expect” coming to WPI, she admits. “Greek Life brings a lot of benefits,” she says, citing alumni involvement for networking purposes and the over 21,000 hours of community service time donated. “It’s a chance for students to become a part of something bigger than themselves.”

And, as it works out, Greek Life does offer great versatility to suit all kinds of students. The classic image of a fraternity house is not always how it works, says Girouard. Not all chapter members live with their Greek brothers or sisters. Some are resident advisors in a residence hall, for example, or live off campus. And some chapters don’t have any housing at all, she says. Some members just participate in events and attend chapter meetings.

Caitlin Donlan, an assistant director of student activities at WPI, joined a sorority as an undergraduate, and knows firsthand the benefits of Greek Life in terms of leadership and service. Both she and Girouard stressed the importance of joining a Greek organization “only if it’s a good fit for you, and if the timing is right. 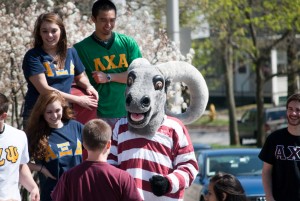 “If you are having trouble with your decision, contact your recruitment leader or recruitment guide. If you decide not to join this year, you can still choose to join next year,” Donlan says.

When and if students choose a Greek organization, says Girouard, they should go with their gut. More students aren’t a part of Greek Life than are, and they may get involved in some other ways on campus, she says. “Some students remain on the fence, and that is absolutely OK.”

Movies like Animal House aren’t a true depiction of fraternities, notes Girouard. The spirit of collaboration, accomplishments, and connections that are forged tend to be underplayed. “I’m always concerned with what we pick up in the media. We probably don’t identify successes as much as we should” when it comes to Greek Life, she says.

For assistant director of student activities Christine Kobza, stereotypes tend to serve as more of a touchstone. “It’s important to have continued conversations with students that encourage them to challenge each other to prevent these stereotypes from becoming a reality on our campus,” she says.

At WPI, the reality is not the stereotype.

Data shows that in 2014, WPI Greek organizations raised over $82K for charity. Greeks have a 96 percent graduation rate, says Girouard. And just over 1,200 are involved in other students groups beyond their sisterhood or brotherhood while in college.

Kobza, who belonged to a sorority in college, feels she still reaps the benefits, as does Donlan. “We recognize the importance … Greek organizations can play post-graduation, which has led to both of us taking on national volunteer roles,” within their organizations, she says. “Greek Life allows for students to create and identify their own personal value set and moral compass.”