Philip Giantris ’65 grew up in a little pocket of Albania in Worcester; now he’s helping bring Worcester’s technical know-how back to Albania, with some help from WPI.

Philip Giantris ’65 grew up in a little pocket of Albania in Worcester; now he’s helping bring Worcester’s technical know-how back to Albania, with some help from WPI. 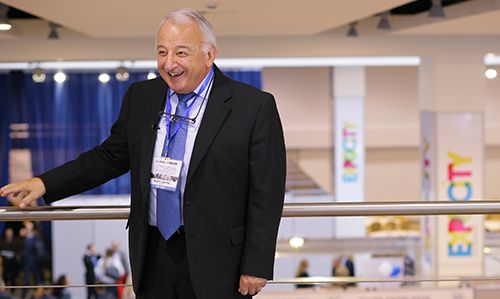 Philip Giantris '65 at the Balkans Joint Conference in Tirana, Albania

Growing up in Worcester’s tight-knit Albanian community, Philip Giantris didn’t know too many people outside of the neighborhood. “All my friends were Albanian,” he says.

Giantris first met other kids who weren’t Catholic or Orthodox on the swim team at the YMCA. But it was WPI—or Worcester Tech as it was called then—that really opened him up to new possibilities. “I had fraternity brothers who were Puerto Rican, Japanese,” he says. “Tech to me was a window to the world.”

Giantris opened that window and never looked back. A civil engineer specializing in water, he has since consulted for companies and governments from Israel to Vietnam. But his proudest accomplishment has been finding a way to give back to Albania, the country that shaped him more than any other. Now executive director of SHUKALB, the water/wastewater association of Albania, his passion for his roots helped inspire the launch of WPI’s Albania Project Center, which gives students the opportunity to travel to the central European country to work on projects for their Interactive Qualifying Project (IQP)—a project that requires teams to delve into a problem that matters to real people. Through the program they are helping modernize a country that has been held back for years by Communist occupation—at the same time learning about a dynamic part of the world they otherwise may never have visited.

Tucked into the Adriatic coastline between Italy and Greece, Albania sits at a strategic crossroads in the heart of the Balkans. Over the centuries, that location has lent itself to repeated invasions and occupations by foreign powers—including Greeks, Romans, and Ottoman Turks. Italy invaded in 1936 on the eve of World War II, followed by the USSR, which closed it off from the outside world for decades. “We were the doormat of Europe,” he sighs.

Giantris was raised in a community that settled around St. Mary’s Albanian Orthodox Church on Salisbury Street in Worcester, where his father was a barber. His high grades in mathematics and achievement in swimming made him attractive to WPI, to the everlasting pride of his parents. “To them, Worcester Tech was like Mount Olympus,” he says. “My father had the newspaper announcement of his acceptance taped to the mirror in this barbershop the entire time I was there.”

Giantris was popular on campus; he captained the swim team and joined ROTC. And the exposure to the wider world gave him the confidence to venture out of Worcester’s Albanian enclave all the way to Boston—which then seemed like worlds away at the time. He accepted a position at the wastewater engineering firm Metcalf & Eddy. But his life really took off after the Nixon administration passed the Clean Water Act in 1972, which mandated improvements to water and wastewater systems around the country, and suddenly made Giantris’s firm in high demand. “That legislation changed my career,” he says.

After leaving in 1988, Giantris and a former colleague opened up their own consulting business that took them all over the world—including fulfilling a longtime goal of working in Albania. "It wasn't about giving back to a country, it was about giving back to a people," he says. "Immigrants from Albania taught me everything I knew about how to be resourceful, work hard, and look out for other people in your group."

When he first visited Albania in the early 1990s, he found a water system in complete disarray, with crumbling infrastructure, leaky pipes, and a civil service riddled with nepotism and corruption. If he was really going to make a difference in the country, he would have to commit to staying a longer time, he realized. He told his wife he wanted to move to Albania for two or three years. “Now it’s year 16,” says Giantris, who these days splits his time between Albania and Maine.

As decrepit as the infrastructure was, he placed the biggest emphasis on training people, founding SHUKALB, a professional organization modeled on the American Water Works Association to sponsor training programs from third grade through grad school. “We are trying to grow a new generation of water managers,” says Giantris, adding, “I am not here to save the world; I am here to make Albania a first-class country in water and sewage.” 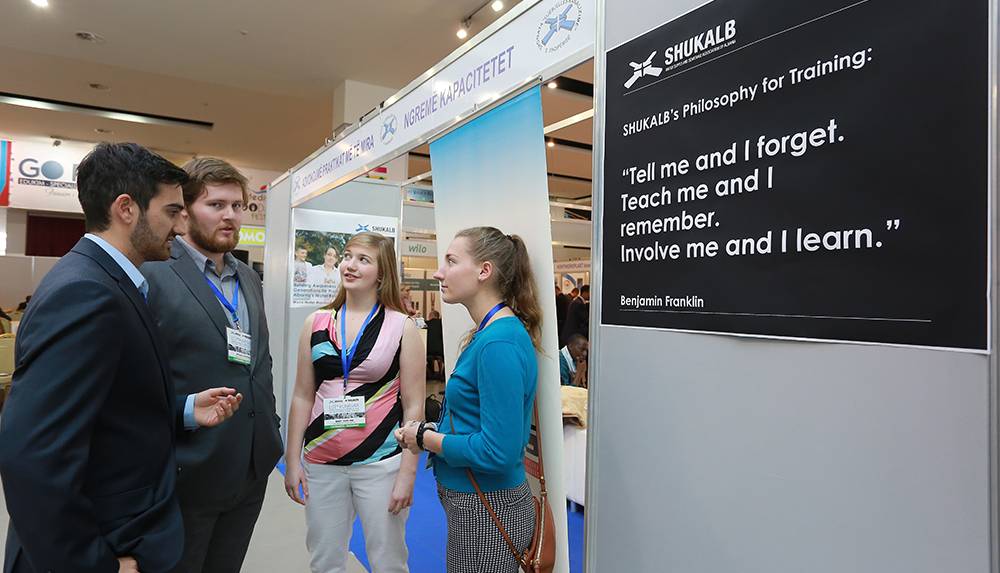 WPI student team outside the sponsor booth at the Balkans Joint Conference in Tirana, Albania

In accomplishing that goal, he naturally looked to his alma mater for help. Hearing about the IQP program, he reached out in 2011 to Peter Christopher, a mathematics professor who had also grown up in Worcester’s Albanian community, and had started teaching at WPI in 1963. “It was always in the back of my head to see what I could steal from America to make Albania stronger,” says Giantris.

Christopher also had reconnected with Albania after communism’s fall, traveling there on international research exchange to teach in 1992. “What comes to mind when I think of that experience is standing in line for bread, and making do without water for long periods of time,” he says. For years, he hoped he could start an educational exchange with WPI, but the destabilization of the Balkan wars in the late 1990s put those plans on hold. 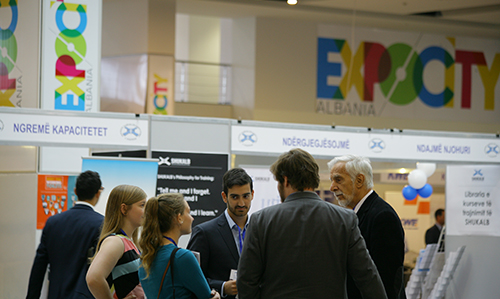 Meanwhile, Christopher participated in nearly a dozen WPI project centers around the world, including San Francisco, London, Costa Rica, and Thailand. Just before Giantris approached him, he had returned to Albania and was stunned by how much the capital city of Tirana had developed. "It was bustling and lively with lots of new restaurants and hotels. At the same time, there were still plenty of underlying problems in the country—making it the perfect place for projects to make a difference."

Christopher immediately embraced the idea of a new project center, making a presentation to the Interdisciplinary & Global Studies Division he titled “So Similar, So Different.” As much as he sold the country, he also sold Giantris, who offered to sponsor a team of students at the water association. In addition, Giantris is a director at the Instituti Harry Fultz, the country’s largest English-language technical high school, which also agreed to participate in the program.

It was bustling and lively with lots of new restaurants and hotels. At the same time, there were still plenty of underlying problems in the country—making it the perfect place for projects to make a difference.

The first group of a dozen students embarked for Tirana in the fall of 2013. Not knowing what to expect, they were pleasantly surprised to find a bustling city with a subtropical climate and great food at cheap prices. Word quickly spread. The second year, 15 students signed up for the program; the next year 23, and in 2016 it maxed out at 24. This year, with 39 student applications, the project center continues to grow in popularity.

The heart of the program is the projects the students undertake. Through Giantris’s association, students partnered with young engineers to survey the Drin River, the longest in Albania. Even though the river serves as a crucial water supply and center for rafting and fishing, it remains underappreciated by many Albanians, leading to poor management and pollution. The students planned a trip to “float the Drin,” documenting the trip with video, photos, and interviews with local residents to raise awareness.

The second year, a new team edited the footage into a half-hour documentary, previewing it at SHUKALB’s annual conference. “It was absolutely amazing,” says Giantris. “They had me in tears.” The video caught the attention of a local TV program, “Wake Up Albania,” which invited WPI students onto the show to interview them about what they'd learned. The project captures the goal of the IQP, presenting a complex problem students must work through to create a deliverable. “They are answering the real-world questions that they are going to answer over and over again in their careers,” he says.

WPI student Daniel Corwin conducting an interview at the conference

Other teams of students have worked on projects to help goat farmers and beekeepers develop strategies to better produce and market their products. At the Instituti Harry Fultz, meanwhile, students have worked for the past three years to introduce a first-in-the-country robotics course for students. This year, the hope is that the school can field a team in the European championships—and further expand the program into public schools in Tirana.

For students, the project center has provided an opportunity to make an outsized difference in a country struggling to overcome its past. “When I first got to Albania, I knew very little about the Drin River,” says Mary Vierling, an aerospace engineering major who had never been out of North America. "After interviewing so many stakeholders and people who were passionate about the river, we became passionate too. I really hope our film creates an impact and leads to a cleaner river to help all those in Albania."

After interviewing so many stakeholders and people who were passionate about the river, we became passionate too. I really hope our film creates an impact and leads to a cleaner river.

As someone who bridges both worlds, Giantris was the perfect person to facilitate the teamwork between the WPI students and the professionals they worked alongside. “I think that’s a big reason why our project came out so well,” Vierling says.

And just as more than a half-century ago WPI helped introduce Giantris to a world outside of his own small community, Giantris is now helping introduce a new generation of WPI students to the world outside of their own comfort zone. "Going to a country like Albania, I had no idea what to expect," says Vierling. "Working in the field with a team of professionals from different backgrounds is not the kind of experience most students get. It opened my eyes to what the world has to offer."

WPI has learned of the passing of Philip Giantrias on Oct. 19, 2017, in Tirana, Albania. “This is a great loss for the WPI project program in Albania. Philip was instrumental in helping to start the program in 2013, sponsoring meaningful projects related to water and sanitation. He loved working with WPI students. His memory will live on by his great accomplishments.” — Professor Peter Christopher, Albania Project Center co-director