From quirky customs to cherished places, WPI observes many unique traditions that reflect the institution’s history and give community members opportunities to express themselves, bond together, and have fun.

Here’s a rundown of some of WPI’s most time-honored and special traditions, many of which are run and managed by the Student Alumni Society. 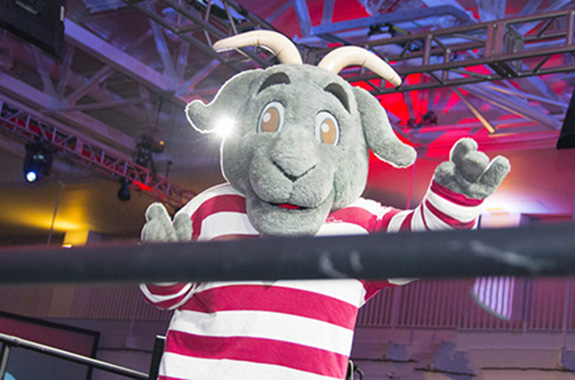 Gompei the Goat
One of only two college goat mascots in the country, Gompei the goat was named for Gompei Kuwada, a member of the class of 1893 who served as WPI’s first goat keeper owing to his initials. The beloved mascot has a widespread presence on campus, including two bronze sculptures: the “Proud Goat” overlooking the WPI Quadrangle, often seen wearing a WPI sweater in the winter, and the “Charging Goat” greeting rival athletic teams outside the Sports and Recreation Center.

Crimson and Gray
WPI’s school colors are crimson and gray. The gray was selected by students who won a boat race in 1872 and the crimson was added shortly after. The two colors are reflected in the bark and leaves of the large eye-catching beech tree growing near WPI’s main entrance.

Cheers and Songs
WPI has a number of officials songs sung at sports games and events, including an Alma Mater written by Willard Hedlund, Class of 1910. Perhaps its most well-known cheer is its numerical fight song, which features 13 mathematical expressions: 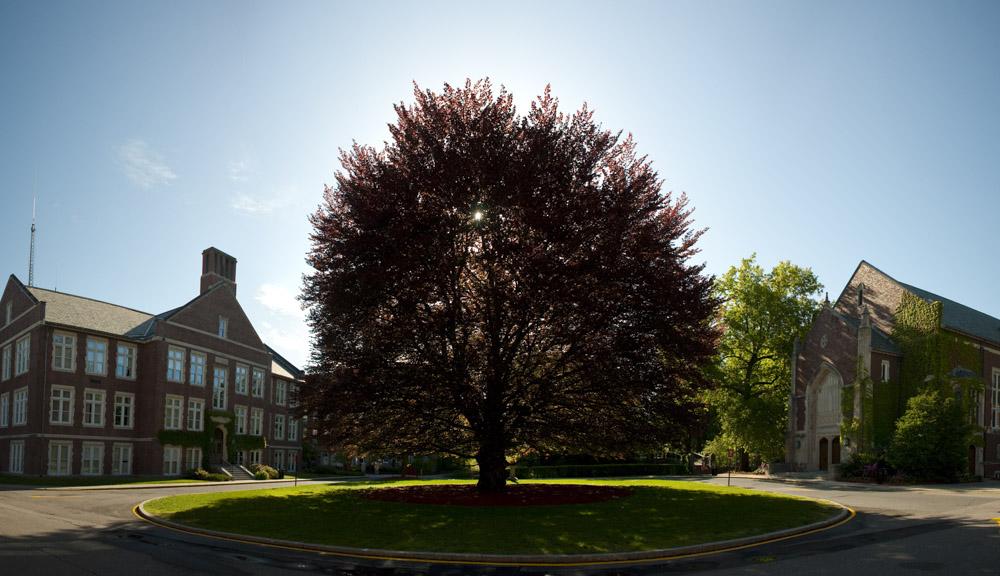 A gift from the Class of ‘43, the iconic beech tree near WPI’s main entrance now stands over 100 feet tall. 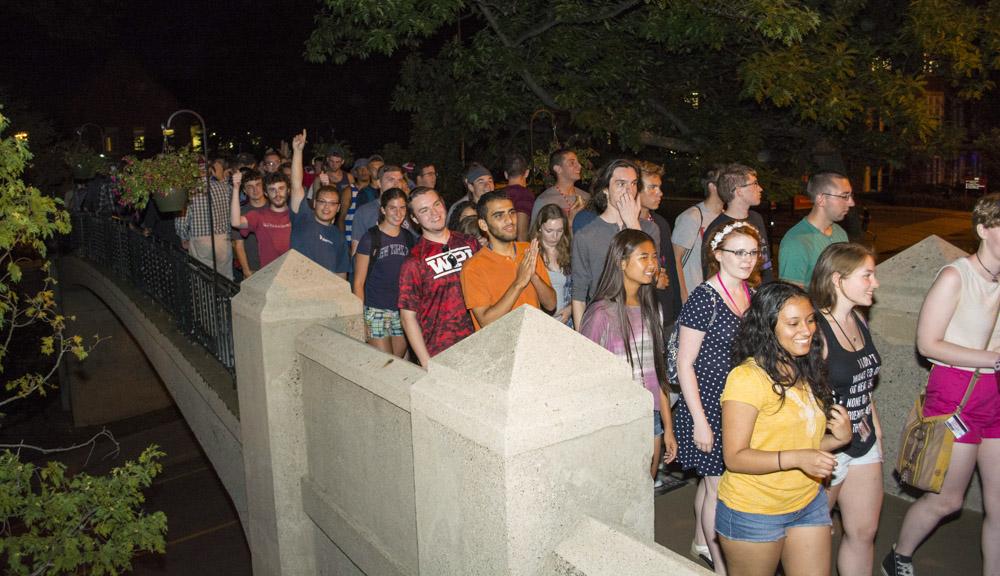 First-year students cross Earle Bridge as a symbolic entry into WPI and again, in the opposite direction, on Commencement. 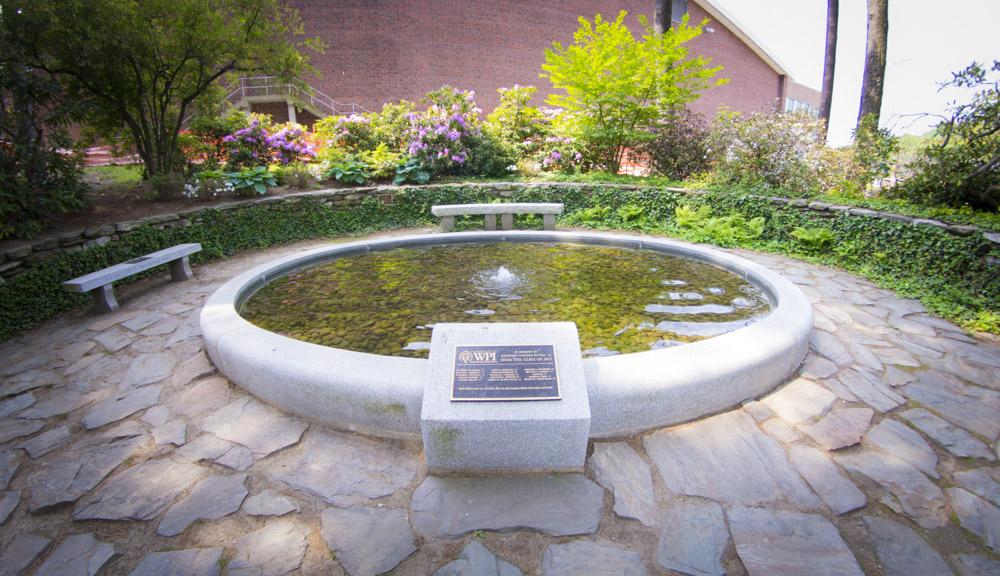 Created in 2001, the Adam El-Khishin Meditation Area offers a quiet space where students can remember those who’ve passed away. 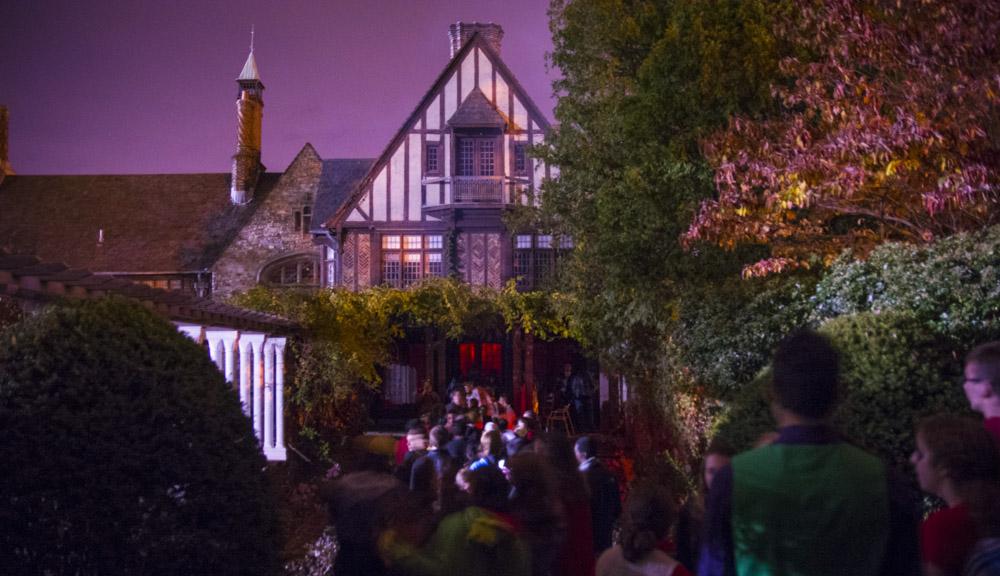 Higgins House is rumored to have a ghost, as visitors claim to hear noises near a hidden staircase where a former occupant died. 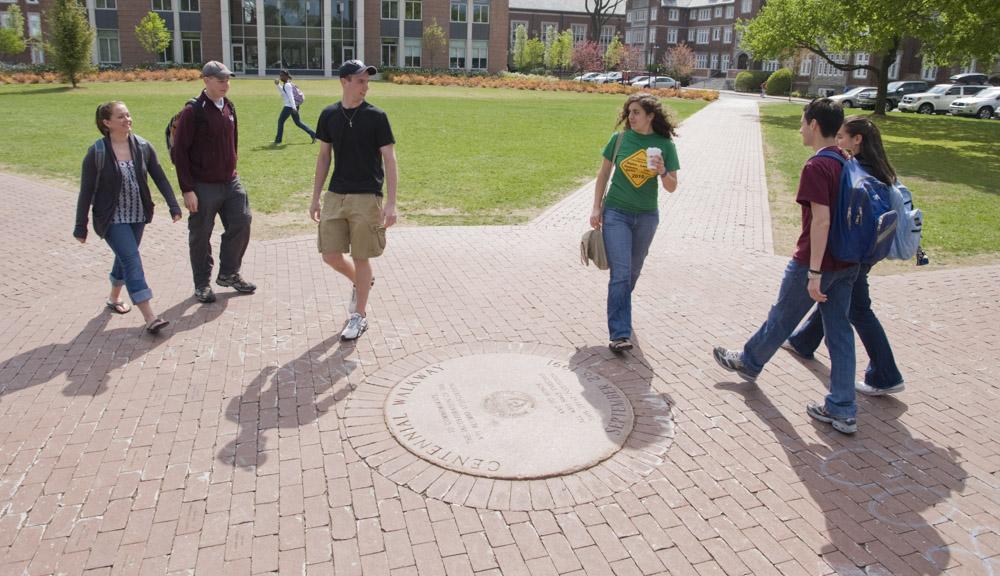 Superstition holds that stepping on the seal at the center of the Quad will stop you from graduating on time.

Goat’s Head Rivalry
Each year, WPI’s freshman and sophomore classes compete in a series of contests with one goal in mind: to win the coveted Goat’s Head Trophy, a bronze statuette of Gompei. The rivalry kicks off with a rope-pull competition at Homecoming and plays out through special activities at major WPI events, including the Celebrity Squares game show, Eskimo Relay, Pennant Rush, Cage Ball, WPI-themed Jeopardy, and culminating Mystery Event at Quadfest.

There’s a Holiday for That
The WPI community also observes a variety of holidays both major and obscure. Groups including the Social Committee, Student Alumni Society, Chartwells Dining, and student organizations plan and host celebrations for holidays ranging from Valentine’s and St. Patrick’s Day to Pi Day, Harry Potter Day, and National Coffee Day.

From department and program initialisms to acronyms for buildings, student organizations, and offices, the WPI community has a long tradition of using abbreviations. Check out our handy guide, which will have you speaking like a native in no time.

Guide to Acronyms at WPI