Theresa has grown not just academically, but also musically at WPI, pursuing her passion for the cello alongside her interest in aerospace engineering––all while maintaining a 4.0 GPA.

Through her involvement with the WPI Orchestra, she had the opportunity to play at Worcester’s Mechanics Hall––a large historic concert hall internationally regarded as one of the world's greatest for its superb acoustics and inspirational beauty. She also performed in an octet with other members of the WPI Orchestra, playing a 30-minute piece without a conductor. “I feel this really improved my musicianship—it helped me listen better to others and learn better how to count and not solely rely on a conductor,” she says.

Her growth is also evident in the classroom, where she says WPI’s project-based curriculum has helped her work better in teams, which, in turn, has helped her develop stronger time management skills. She also appreciates the seven-week terms that make up the WPI academic year.

“Although it makes the classes very fast-paced, I like that it is unique and––for me––it is more conducive to learning,” she says. “Only having to focus on three classes at a time leads to being less stressed over school work and having all the classes every day makes it easier to form connections with professors.”

Theresa is looking forward to completing her IQP (Interactive Qualifying Project) and MQP (Major Qualifying Project) over the coming years to gain further team experience and potentially travel abroad. After graduation she hopes to work in the aerospace engineering industry near her hometown. 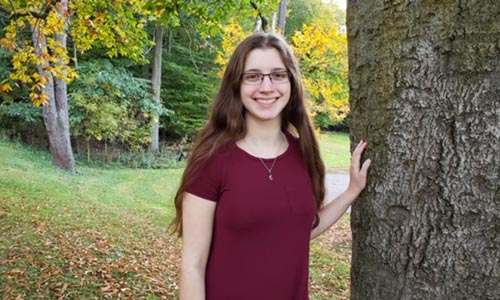 Typically, a day for me at WPI consists of first grabbing breakfast at the dining hall, then going to my morning classes.

I then try to get lunch between 11-1 depending on if that timing works with my schedule.

I then go to my afternoon classes (if I have any) and then start on my homework.

If its Monday or Wednesday, I have orchestra at 5:30, otherwise I just work on homework until dinner.

Check out other Student Voices here.