Research is a major part of the mission and day-to-day life of the Department of Chemistry and Biochemistry. Our faculty and students conduct groundbreaking research that has practical applications in everyday life–from the heath care and medications we receive to the energy we use to make our world go, and beyond.

Our research laboratories are housed in the Life Sciences and Bioengineering Center at Gateway Park, a state-of-the art, major research facility in which bays are organized by research focus rather than by department and researchers from the full range of life science disciplines freely exchange ideas.

Learn about our research interests of faculty members in the WPI Department of Chemistry & Biochemistry:

In his busy lab, José Argüello, professor of chemistry and biochemistry, is studying the biochemical ballet by which cells transport metal micronutrients, such as copper, zinc, cobalt, and iron, across their membranes and to the sites where they play such fundamental roles as helping blood transport oxygen or plants fix nitrogen from the air. Because of the importance of these basic biological functions, a better understanding of the mechanisms of heavy metal transport has implications for the treatment of a host of diseases like tuberculosis, for human and animal nutrition, and for the bioremediation of heavy metal pollution.

He has received multiple research grants from the National Science Foundation (NSF) and the National Institutes of Health (NIH), including an NIH Research Development Award for Minority Faculty in 1995 and a $1.3 million award in 2016 for a systematic study of copper in the bacteria Pseudomonas aeruginosa, a leading cause of hospital-associated infections. He was recently elected Fellow of the American Association for the Advancement of Science (AAAS), the world’s largest general scientific society, “for distinguished research discoveries elucidating the mechanisms underlying metal ion transport and the role of bacterial metal transporters in agriculture and infectious disease.” Research interests include: Mechanisms of micronutrient metal transport in biological systems; membrane protein chemistry; role of micronutrient metals in pathogenic virulence and endocytic symbiosis; role of bacterial metal transport proteins in tuberculosis and in plant nitrogen fixation. Learn more about Professor Argüello

Prof. Burdette investigates multidisciplinary research at the interface of metals, biology and photochemistry. Most of the projects in the Burdette group begin with the synthesis of chemical tools that are designed to execute a particular task such as bind and release a metal of interest. The new chemical tools are then characterized spectroscopically and applied to answering a question in a related field like biology either within the group or in collaboration with other groups. Research interests include: Bioorganic zinc chemistry; metals in neurotransmission; metal ion signaling in biology; metal in homeostasis; metal ion chelators: binding and selectivity; organic photochemistry/photochemical tools; small-molecule and polymer-based fluorescent sensors; new fluorophores and chromophores; ligand synthesis; living polymerization methods. Learn more about Professor Burdette.

Prof. Dempski’s research focuses on understanding the mechanism of biomedically essential, but understudied membrane proteins. This includes the human zinc ZIP4 transporter which has been implicated in the initiation and progression and solid tissue tumors such as pancreatic cancer as well as the light activated channelrhodopsin-2 ion channel, a central tool in the emerging field of optogenetics. Learn more about Professor Dempski. ​

Prof. Grimm and the Grimmgroup are interested in understanding what makes a particular material efficient at converting sunlight to electrical or chemical energy? Conversely, what makes a material a poor energy converter? Using a range of spectroscopic techniques, the group seeks an atom- and bond-level understanding of the properties of non-traditional materials for energy conversion and storage.

Supramolecular chemistry is the design of molecular materials and structures that exhibit useful properties resulting from the collective interaction of different molecular components. The Grimmgroup is motivated by quantifying and controlling the bulk and surface properties of solar energy conversion materials.  Learn more about Professor Grimm.

Dr. Heilman and his lab is working to discover how a virus can destroy only cancerous cells directly with the hope of developing new cancer therapies. He spoke to Nature.com in a video explaining how viruses function and how the machinery of a virus could be hijacked to cure diseases. Research interests include: Animal virus protein; apoptosis; cancer cell selectivity; subcellular localization; functional domain mutagenesis. Learn more about Professor Heilman.

Prof. Kaminski is a computational physical chemist who models small molecule/protein interactions. Toxic proteins are at the root of many diseases, so pharmaceutical companies look for compounds called ligands that will bind tightly to these proteins and deactivate them. He has developed powerful new computational tools that will make the search faster and more precise.

Prof. Mattson is an organic chemist with a strong medicinal chemistry component in her research. Her research is directed at the synthesis of complex molecules that have pharmaceutical value or promise. Her studies looks at the preparation of important synthetic building blocks using new transformations catalyzed by small organic molecules. Of particular interest is the development of reactions catalyzed by organic molecules through non-covalent interactions. Her group applies these new synthetic methods towards the synthesis of naturally occurring bioactive targets.

Prof. Perez-Olsen studies the maintenance of cell membrane composition in C. Elegans and how the lipidome is affected by age and/or disease state. In addition, she is interested in identifying genes that are important for regulating membrane maintenance under normal and stressed conditions. She uses advanced mass spectrometry to study the lipid composition of cell membranes. Her research aims to understand the linkage between biomembrane maintenance and diseases like cancer. 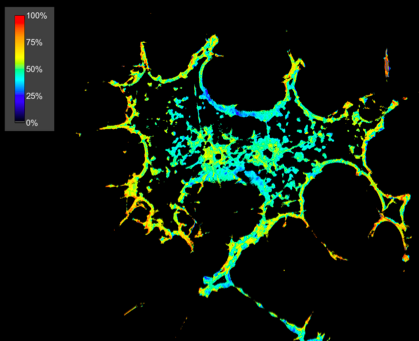 Prof. Scarlata’s group explores how cells communicate with the outside world. This communication system can involve a group of proteins called “G-proteins” that can cause cells to move, divide and change structure. Using biophysical methods, the Scarlata group can watch how cells respond to different agents and try to control their responses.

She uses sophisticated spectroscopic, kinetic and thermodynamic methods to study lipid/protein interaction in cells and model systems. Her own research, funded with a $308,000 annual R01 award from the National Institute of General Medical Sciences, focuses on guanine nucleotide-binding proteins’—or G proteins’—role in transmitting signals to various stimuli in the body, particularly in heart muscle cells and neurons.

She is president of the Biophysical Society, with over 9,000 global members. Her goals in the new role include efforts to establish a more stable U.S. research funding system, spreading the word about the biochemical and physical science realm of WPI, and forging more community collaborations with groups like UMass Medical School. Previously, she was the chair of the societies’ Committee for Professional Opportunities for Women. Prof. Scarlata has pioneered the adoption of the society's gender equity policy that made a 'commitment to inclusivity and diversity and not at the expense of scientific excellence'.