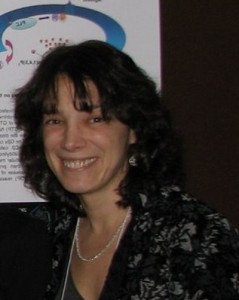 Suzanne Scarlata, the inaugural Richard T. Whitcomb Professor of Biochemistry, is now president of the Biophysical Society, with over 9,000 global members. Her goals in the new role include efforts to establish a more stable U.S. research funding system, spreading the word about the biochemical and physical science realm of WPI, and forging more community collaborations with groups like UMass Medical School.

The society, founded in 1958, works to encourage the development and dissemination of knowledge in biophysics. A member for more than 30 years, Scarlata has served on various committees for the Washington, D.C.,-based organization. Her term is a three-year commitment: as president-elect last year, as president this year, and as past president in her final year.

Scarlata is fairly new to WPI, having joined the faculty last August. She says the problem of unreliable funding for scientific research is a federal budgetary issue that is “kind of a nightmare.” The idea she supports is tying funding levels to the gross national product (GNP), as countries such as Japan, Korea, China, and Germany already do.

“It’s not a new idea, and it’s not my idea,” she says. “But we would have some kind of stability if the U.S. could commit to this.”

Conducting research, especially research that could impact human health, with unstable funding is difficult, she says. “You can get funding for a nice piece of equipment, but lose money for trained staff to run it,” in a lab setting. Or if a project begins, then loses funding and lab staff has to be let go, it’s tough to rebuild, she says; “… those people are likely working elsewhere by the time funding is restored (if it comes back at all).”

Research budget items, voted on by Congress, seem to have less chance of getting funding if it is for a project that isn’t as clinical in nature as others. Scarlata says this is because it can be harder for members of Congress to see the end result of fundamental research. Even more so with National Science Foundation (NSF) projects, she says, which are more basic in nature.

“But a protein-folding study can be important clinically in the long term for conditions like Alzheimer’s disease or breast cancer, she says—NSF funds a wide spectrum of fundamental science and its grant applications are vague by design. “They don’t want folks to be limited,” in considering end-result applications. Work with fruit flies, for instance, she says, can trace a gene that has potentially valuable applications for humans. But if that is not clearly stated, it could be missed by laypeople.

Scarlata recently returned from the nation’s capital, where she discussed these issues with Congressional representatives.

She says that where WPI is a relatively smaller school known for its engineering, she hopes to get some exposure for other programs here, as well. Part of that will be done with the annual society meeting that will be held at WPI in June, with society leadership from as far away as the U.K. and Australia visiting campus.

She would also like to strengthen community conversation regarding biophysics, suggesting potential meet-and-greet sessions in the future with UMass Medical School, for instance.

Scarlata joined WPI from Stony Brook University on Long Island, N.Y., where she had worked for 24 years, most recently as a professor in the Department of Physiology and Biophysics. Her own research, funded with a $308,000 annual R01 award from the National Institute of General Medical Sciences, focuses on guanine nucleotide-binding proteins’—or G proteins’—role in transmitting signals to various stimuli in the body, particularly in heart muscle cells and neurons.