A world leader in the study of fire dynamics and the application of fire models, Professor Dembsey is developing new techniques and guidance documents for practicing engineers to measure fire properties of materials. His work will allow practicing engineers to more accurately predict fire behavior. Other projects include work on the fire safety of green building materials and how materials affect the optimization of building assemblies for fire performance, ease of manufacturing and cost effectiveness.

My materials work will allow fire protection engineers to develop more effective and efficient designs in the built environment and serve as a basis for improvement of regulatory policy. The result will be greater life safety and property in today’s cost-conscience world. 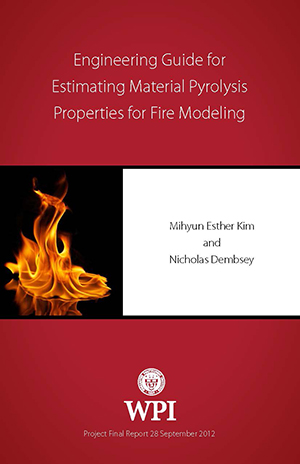 Report Abstract: The environment in heavy industries is distinguished by heavy tear and rough fuel surfaces. The surface roughness magnitude of the gauges, dents etc. could be substantial, where the roughness depth would range from less than a millimeter up to several millimeters. Forest fuel surfaces will generally have rough surface characteristics, roofs and facades on residential homes in the wildland urban interface will in most cases be non-flat. Performing fire experiments and testing the ignition characteristics of the fuel surface, the influence of surface roughness and surface structures should be investigated and accounted for. Ignition would occur first at any part exposed by heat transfer from several directions and we are facing a two/three-dimensional ignition scenario. In this paper the gauge depth, angle and distance was varied to depict roughness. In five out of thirteen experimental cases the average ignition time showed significant difference when compared to the flat surface case, but no clear pattern was detected. No clear patterns were found when studying the two-dimensional analysis results at the time of ignition. In both experiments and the two-dimensional analysis a majority of the temperatures were within the one standard deviation variation and did not show any significant difference compared with the flat case, except when comparing the gauge bottom temperatures and upper surface temperatures of the two-dimensional analysis where significant difference was found in all cases.