Hospitals provide a wide range of healthcare services to people of all ages and abilities. Surgery is undertaken, intensive care for critically ill or injured is provided, and many patients may not be able to move under their own power. It is not practicable to think that all patients can evacuate down a set of stairs in a fire. As a result, the concept of horizontal evacuation is often used. In this approach, smoke-rated (and often fire-rated) compartments are used to physically break up a floor area into smaller compartments, with each smoke compartment being designed to hold the occupant load from a horizontally-adjacent compartment, as well as its own. In the event of a fire or other emergency, the patients can be moved horizontally from the threatened compartment to an adjacent space, where they will be protected in place while firefighting operations or evacuation to other locations are undertaken. With support from Fire Safe North America, a timed egress study using computer evacuation models was undertaken to better understand the influence of smoke compartment size on horizontal evacuation time. 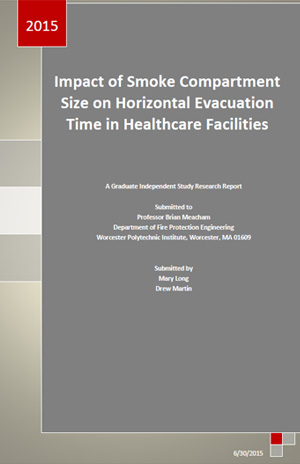