As a student in the Physics Department at WPI you’ll have access to modern research facilities in which you will collaborate with world-class faculty members while exploring matter and energy, and the interaction between them.

Working with sophisticated instruments in these facilities, you’ll be exposed to meaningful work, and you’ll be challenged to make your own discoveries, guided by some of the top researchers and theorists in this ever-changing field.

Learn about a few of our pioneering physics laboratories: 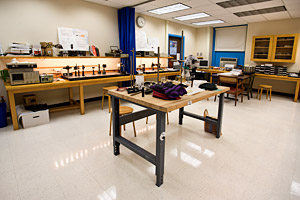 Photonics, the study and application of light, can be used to describe older technology (such as light bulbs) and newer discoveries, such as fiber optic communication. Photonics impact such diverse industries as telecommunications, consumer electronics, and medicine.

The IPG Photonics Laboratory is used to teach photonics with emphasis on fibers, lasers, and detectors. The lab is used for classes, research, student projects, and tours for prospective students. Current experiments being conducted are classified into four categories: fiber optics, detectors, lasers, and optics.

Available equipment in the lab: 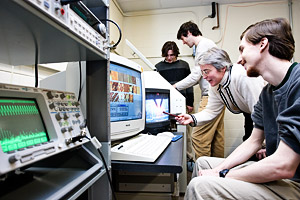 Features of the AutoProbe M5 AFMs: 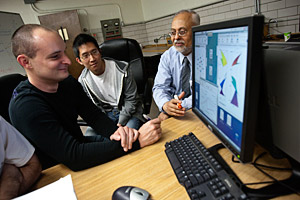 The Center for Computational Nanoscience (CCN)

The CCN was created to address nonlinear problems in many fields using a multidisciplinary approach. Ideas come from physics, numerical analysis, computer science, and other fields of research. Some areas of research being addressed at the CCN include quantum modeling of nanostructures, quantum computation, designing MEMS (micro-electromechanical systems), NEMS (nanoscale electromechanical systems), multi-component diffusion in fluids and solids, nonlinear optics, and mathematical biology.