Whether they are working in core physics areas or collaborating with colleagues in mathematics, computer science, engineering, or life sciences, faculty members and students in WPI’s Physics Department are actively engaged in research to develop practical solutions for real-world problems.

Learn more about two of the areas in which WPI physicists are making groundbreaking discoveries: biophysics and nanoscience. 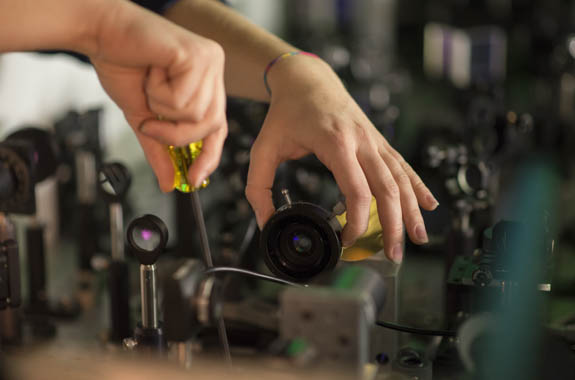 This science seeks to explain biological function in terms of the molecular structures and properties of specific molecules. WPI researchers are making strides in molecular and multimolecular aspects of biophysics by fostering groups engaged in multidisciplinary research in this field.

Nanoscience, photonics, and electromagnetics are interdisciplinary fields that incorporate elements of physics, engineering, materials science, biotechnology, and chemistry.  With many revolutionary technologies over the past decades, many research endeavors deal with structures and scales that are on the order of 100’s of nanometers or smaller.  Nanoscience and nanotechnology involve the ability to see and to control these tiny, individual atoms that make up everything on Earth. The food we eat, the clothes we wear, the houses we live in, and even the human body, all consist of atoms.  The interaction of photons and electromagnetics at these small scales leads to new interactions between light and matter that include the quantum mechanical properties of matter and structures engineered at the nanoscale level.  Research will lead to the next generation of technologies, such a metamaterials, quantum enable devices for information science, and micrometer and nanometer sized sensors with enhanced interactions with matter.

Devices on these small scales and something as small as an atom are impossible to see with the naked eye—in fact, the atom is impossible to see with the typical microscope. Therefore, physicists generally have to invent the instrumentation to study and build things at the nanoscale level. Once physicists developed the right tools, such as nanoscale 3D printers, the scanning tunneling microscope (STM), and the atomic force microscope (AFM), the benefits of nanoscience research to society became very clear.

The potential applications of nanoscience research are considerable, affecting such areas as medicine, transportation, communication, and sustainable energy

See WPI’s physics facilities to discover the equipment and space we offer for innovative and well-supported research.