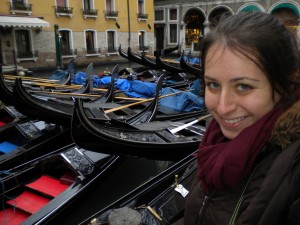 With her senior year at WPI winding to a close, Madelyn Coryea, a computer science major, thought submitting a unique entry in a poster contest that celebrates the STEM fields was a great way to pass on her enthusiasm for the discipline. But she never expected to win first place in the engineering category of the Engineering Education Service Center (EESC) Spring 2014 Poster Contest. “I was shocked,” she laughs.

Because WPI is an engineering school, Coryea thought an engineering theme poster would be a good match. “I do a lot of Photoshopping,” says Coryea of what prompted her to enter a poster. “I am graduating soon, and I thought it might be interesting to look into.”

Coryea’s award-winning poster features a face clad in scientific goggles that are reflecting trees, equations, and even a nuclear explosion. Gracing the margins in bright orange are the words “Engineers solve problems by seeing the world differently.”

The words resonate with Coryea, who enjoys all the varied ways computer science shows her how to solve problems. The contest, she says, is a method for her to inspire young people into the engineering and STEM fields as careers, something the world at large doesn’t always encourage, she says.

Coryea found that encouragement at WPI—and, specifically, through the Women in Computer Science club. After earning near-failing grades in her first computer science class, she struggled to improve her grade by studying every day with the senior assistants. She became friendly with the then-president of WICS, joined the club, and found a community of other women in her major she never knew existed. Eventually, she served as president herself, and she continues to champion the benefits of the club for fun events, collaboration, and community.

Computer science appeals to Coryea’s interest in user experience, where her future career lies, and for the way it challenges people to come up with different solutions to problems. “It tests the limits of your brain,” she says. “It’s a really rewarding field.”

Baine also agreed with Coryea’s inventive approach to conveying her ideas about engineering’s multilayered approach to problem solving. “Engineers are some of the most creative people on the planet,” Baine says. “It’s important to keep them creative.”

Coryea, who was in the Pep Band Color Guard and plays the piano for relaxation, plans to pursue her interest in user experience after graduation. She will also continue as CEO of peachplex.com, a social bookmarking site she co-founded in her sophomore year. Frustrated that it took her so long to repeatedly find the same links she needed for a class, she started peachplex.com, which organizes and saves links. The links can be sorted and organized (for work, for school, by class, etc.) and will always be ready when a user needs them.

Peachplex also emulates Coryea’s attitude on user experience in general. “If the computer is slowing you down, that’s not fair,” she says. She believes, as her poster conveys, that there’s always another angle to explore to come up with a solution.