FRC teams across the world are using tools WPI helped develop, including 40 teams this weekend in Worcester 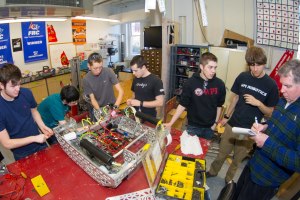 For the last six weeks, nearly 75,000 high school students—representing more than 3,000 teams across the world—have spent countless hours designing, building, and testing robots to compete in the wildly popular FIRST Robotics Competition, which starts this month. Worcester Polytechnic Institute (WPI) will host 40 teams from New England (Connecticut, Maine, Massachusetts, New Hampshire, and Vermont) on campus March 11–13. As many as 1,000 high school students, their mentors, and families are expected to attend.

District and regional tournaments are being held through March and April leading up to the world championship in St. Louis, Mo., April 27-30. In each level of competition some robots drive, some lift things, and some launch objects, but they all have one thing in common: WPI-designed software under the hood.

FIRST (For Inspiration and Recognition of Science and Technology) was founded by Dean Kamen, a WPI alumnus. More than 20 years ago, WPI became one of the first universities to work with FIRST on ushering K-12 students through the STEM (science, technology, engineering, and mathematics) pipeline by engaging them in robotics.

"The FIRST program is a phenomenal way to not only get kids interested in STEM, but also give them a chance to develop a real affinity for robotics and particular skills in mechanical, electrical, and/or computer engineering." said Ken Stafford, director of the WPI Robotics Resource Center. "WPI faculty and students have a long history of working with FIRST and National Instruments as the developers of this complex software for the competition."

Each year WPI helps write and design the FIRST Robotics software library, an integral element of the control system used by all teams in the competition. The software library, called WPILib, includes a wide range of modules that allow teams to easily and quickly develop the programs behind the robot’s control system, such as handle sensors, motors, the driver station, and a number of others responsible for timing and field management.

WPI has also been a pioneer in Robotics Engineering at the collegiate level – offering the nation's first bachelor's degree in Robotics Engineering, then later adding a master's program and a PhD program and becoming the only university to offer all three levels of robotics engineering education. Numerous WPI students who themselves participated in FIRST as high school students are now involved in the group that writes the software for the program’s annual challenge.

The theme of this year's FIRST challenge, called "Stronghold," is to build robots that can breach opponents' defenses, capture their tower by first firing at it with "boulders" (small foam balls), and then surround or scale the tower using rungs. The software, along with the challenge, is released to all teams simultaneously; this year the release date was January 9. The teams, composed of high school students and their technical mentors, had just six weeks to build a robot to compete in the challenge.

In addition to providing software for the control system, WPI serves as the clearinghouse and source for many of the support materials, including documentation, tutorials, and videos, related to the controller and also to mechanical, electrical, and team dynamic subjects. The materials for FRC are available here and here.