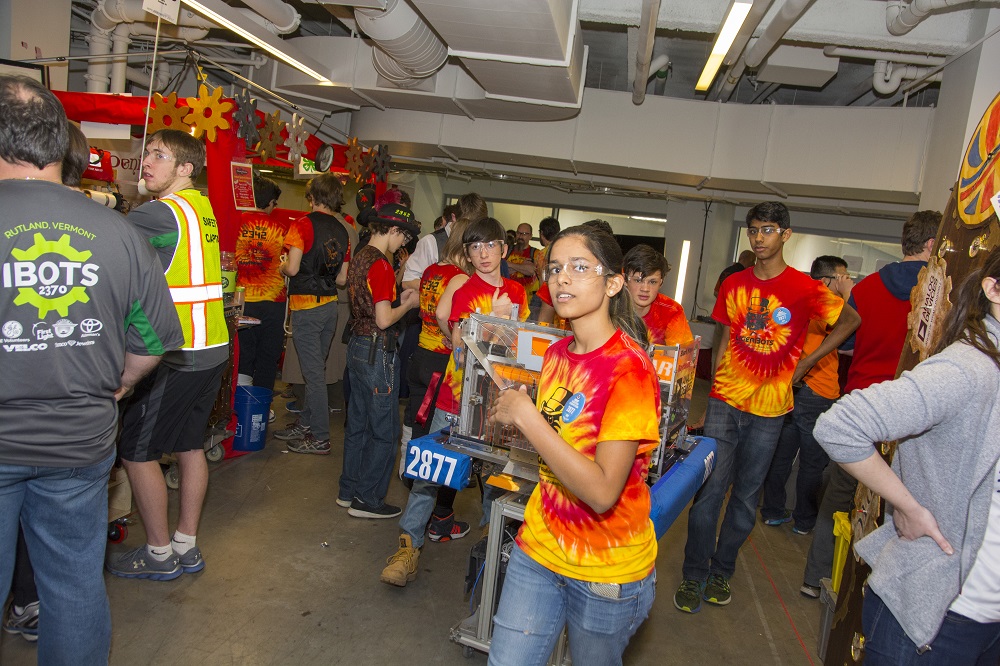 FRC teams get ready for the competition in 2018

This weekend, high school robotics teams will compete on campus showcasing the sportsmanship and STEM talent across the region

After six of weeks of competition, which followed more than a month of design work and building, 64 teams representing high schools across New England will compete at Worcester Polytechnic Institute (WPI) in the FIRST Robotics District Championship this weekend. As many as 3,000 high school students, their mentors, and their families will attend. Qualifying rounds will begin on Thursday, April 11, and continue through Saturday, April 13, with playoff matches starting at 1:30 p.m. The event is free and open to the public.

“Teams competing at this event have been working towards this goal all season, improving their designs and competing in their qualifying events to earn the right to play at this Championship,” said Colleen Shaver, director of the robotics events group at WPI. “The excitement and energy will be at its peak, and this event will appeal to all audiences.”

This year’s First Robotics Competition (FRC) challenge is DESTINATION: DEEP SPACE. FIRST describes the challenge as “two competing alliances collecting samples on planet Primus. Unpredictable terrain and weather patterns make remote robot operation essential to their mission on the planet. With only 2 minutes 30 seconds until liftoff, the alliances must gather as many cargo pods as possible and prepare their spaceships before the next sandstorm arrives.”

About FIRST and WPI

FIRST Robotics is part of FIRST (For Inspiration and Recognition of Science and Technology), an organization founded by WPI alumnus Dean Kamen in 1989 to inspire young people’s interest and participation in science and technology. The FRC engages high school students through an intense robotics competition centered on a common theme, which changes each year.

As a pioneer in robotics engineering—offering the nation’s first bachelor’s degree in Robotics Engineering, then later adding a master’s and PhD program. More than 20 years ago, WPI became one of the first universities to work with FIRST on ushering K-12 students through the STEM pipeline by engaging them in robotics. For more than a decade, WPI has helped write and design the FIRST Robotics software library, an integral element of the control system used by all teams in the competition. The software library, called WPILib, includes a wide range of modules that allow teams to easily and quickly develop the programs behind the robot’s control system, such as handle sensors, motors, the driver station, and a number of other components responsible for timing and field management. Numerous WPI students who themselves participated in FIRST as high school students are now involved in the group that writes the software for the program’s annual challenge. In addition to providing software for the control system, WPI serves as the clearinghouse and source for many of the support materials, including documentation, tutorials, and videos, related to the controller and also to mechanical, electrical, and team dynamic.