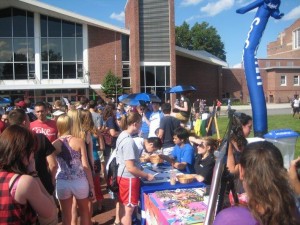 Views from the 2012 Student Activities Fair

One of the event’s coordinators, Sandy Liberatore, gives some insight into what new students – and returning students as well, should they choose to attend – might see at this year’s fair. Of the approximately 180 clubs at WPI, 165 will be represented, she says. Each organization will have its own table and can promote itself however it sees fit. Some groups will need a little more room than others, though. The Chess Club plans to have an active game of chess going while members meet with students, and the Society of Automotive Engineers is parking a car next to its table. Liberatore isn’t sure what they plan to do with the car, but performing repairs on it seems likely and is sure to intrigue students interested in automobiles, she notes.

The WPI Ballroom Dance Team also will be in attendance, promoting the organization with the aid of some creative movement. Says team president Amanda Weis, “We usually have some photos of performances and ribbons from competitions with us to show off. … We play some fun music and have team members dancing near our table.”

And putting on a good show is extremely important. 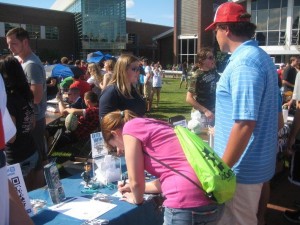 “Most incoming freshmen – and a lot of upperclassmen– don’t know very much at all about the clubs on campus, and the Activities Fair is by far the best way to reach as many people as possible at once and get new members excited,” says Weis.

Junior Peter Chambers agrees. “All of the clubs represented at the fair are looking for future leaders and talent in their class, and it is important for freshmen and upperclassmen to attend in order to broaden their interests or deepen their passions,” he says. Chambers is presently the commodore of the WPI Sailing Team, which in addition to having its own table will be bringing a 420 Class sailboat to the fair.

“I started with the sailing club during the orientation activities fair two years ago, and after learning about the team I was able to jump right in,” Chambers says when asked if the fair holds any personal importance. “After meeting members of the team, I knew it was something I wanted to stick with, and I ended up becoming the president – or commodore – after my freshman year.” 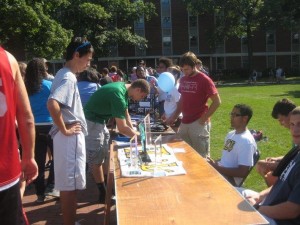 The Student Activities Office has invited roughly 15 vendors from local supermarkets, yogurt shops and auto body shops, all in an attempt to attract as many students as possible. Liberatore expects a turnout of close to 3,700 students, which is impressive considering the incoming freshmen class numbers just over 1,000.

Students won’t be the only ones at the fair on Wednesday. Professor Ken Stafford, plans to be in attendance, and with good reason. Stafford is the advisor to the Sailing Team, the WPI Racquetball Club, the WPI/Mass Academy Robotics Team, the Collab Lab, and INSIGHT Group 19, all of which will be promoting their organizations on Aug. 28. When asked which table he’s decided to call his home this year, Stafford says he prefers to “wander,” leaving the table-manning up to the student leaders themselves.