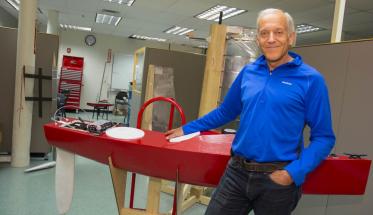 When summertime rolls around, Ken Stafford’s thoughts immediately turn to sailing. But those thoughts of slicing through the open water are never totally separated from his other all-consuming passion—robotics.

Luckily, Stafford has found a way to combine both in SailBot, an international sailing competition in which Stafford and a WPI team will compete in the second week of June. And although sailing robots sounds like a fun way to pass the time, Stafford, a full teaching professor in mechanical and robotics engineering, says the challenges are astonishing. “It’s an incredible exercise to understand all the sophistication needed for control of robotic vehicles of any sort,” he says. “But it’s more complicated with sailing because of the hard-to-predict conditions.” 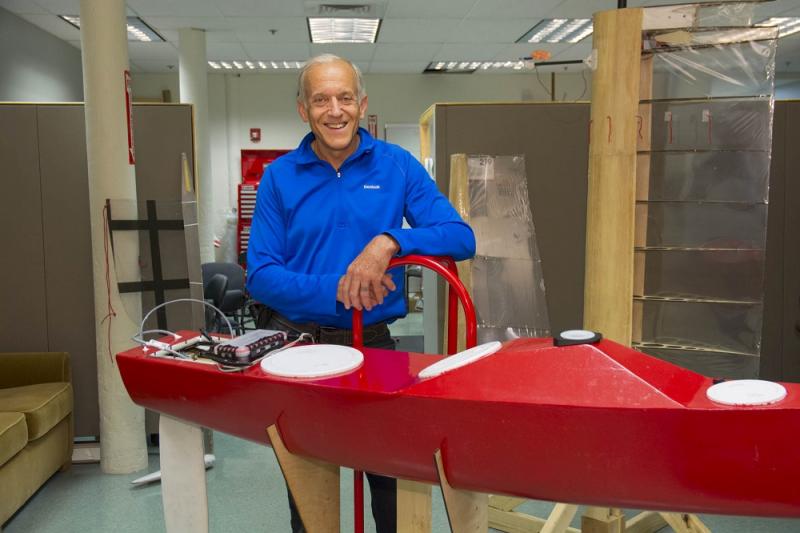 Ken Stafford poses with his sailbot.

Waves, wind, precipitation, and water conditions make controlling a robotic sailboat exceedingly difficult. “You have to be a sailor and a roboticist to do this,” says Stafford. “You have to be both. It is one of the toughest robotics problems you can tackle.” Luckily, many team members also took Stafford’s sailing PE-credit class, which he has taught for more than two decades. Between the PE course and the classroom, the students are trained sailors and engineers with the mindset to do both and the readiness to face unlikely scenarios. “Like every good WPI program, you learn a lot more than you were taught in class,” he says.

And those extra opportunities for learning are where Stafford thrives—as do his students. He especially appreciates competitions when students get to blend theory and practice in what’s often an unpredictable environment. But because WPI doesn’t make a project grade dependent on tournament placement, the teams feel freer to try things they aren’t sure will go as planned.

Stafford first arrived at WPI in 1994 as the commander of the Air Force ROTC program and a professor in aerospace studies. He took a year off from ’97 to ’98 to sail with his family down the North American and South American coastline; upon his return the associate provost asked him what he knew about robotics. Expressing enthusiasm and interest in robots, Stafford soon found himself in charge of WPI’s fledgling program. He also started running Mass Academy’s robotics club and teaching electives at the school, a practice he continues still.

This summer, Stafford will use his robotics knowledge to inspire students to pursue studies in the field. On June 9, he will run a robotics workshop for the National Consortium of Secondary STEM Schools’ annual Student Research Conference. The conference, held at Massachusetts Academy of Math and Science, lets him show participating students from across the nation the thrill of robotics and what makes WPI’s pioneering robotics program so special. “My goal is to get a light bulb turned on and show them something they haven’t seen before,” he says. Realizing he will be addressing some of the most tech-savvy students, he wants to demonstrate the value of connecting that technical know-how with something worthwhile and practical and that doesn’t always fit neatly into a back-of-the-book problem-solving method.

"My goal is to get a light bulb turned on and show [students] something they haven't seen before." -Ken Stafford

“For over 10 years I have taught Introduction to Robotics,” he says, “and it’s impressive what the students know, but it’s also stunning what they often struggle with.” With calculators and computers, many students lack the basic skills of being able to do mental math and understand the concepts underlying many problems. Stafford is excited to have discussions with teachers and show case studies. “Schools have lots of pressures to meet standards, but some standards don’t meet my criteria,” he says. “It’s common, practical sense as opposed to knowledge.”

Stafford’s sailing and WPI career cannot be separated. In high school and college, he was fully committed to the thrills provided by flying and motorcycles. After college, however, a serious motorcycle accident sidelined him and prompted his wife to encourage sailing. He was quickly hooked. Family trips have often revolved around sailing and this summer will bring a trip to Lake Huron for some kayaking, sailing, and camping. “I am a born-again sailor,” he says.

He’s also a highly respected, if modest, member of the WPI community, receiving the 2010 Denise Nicoletti Trustees Award for Service to the Community. In addition to serving as advisor or mentor to many student clubs, organizations, and individual students, Stafford is the longtime coach of WPI’s sailing team, a club sport that races competitively. In all the years he has been at WPI, he says he has found a community that extols his excellence-focused work ethic, his passion for learning, and his gregarious outlook on life. Passing that enthusiasm to students and sharing the excitement of being engaged with what they are passionate about thrills him.

“In the over 20 years I have been traveling with teams, I have detected a particular characteristic of WPI teams. I have high expectations for every team I travel with. Our teams know how to actualize designs—they know how to build stuff.” -Ken Stafford

Sailing and robotics have always been a part of Stafford’s WPI teaching years, but he found a community on campus apart from the students—one that grounds him in a way that is both uplifting and reliable.

For more than 40 years, he's been an active runner, competing in approximately 20 marathons and logging many miles each week. When he came to WPI and connected with the Footpounders running club, he found a perfect fit. “When I think of all the influences that have kept me here at WPI, one part of the connection was the Footpounders,” he says. “It’s one of the strongest influences.” He continues to run two or three times a week with the club. “It’s a social club, a running club, and a commiserating club,” he says. Sometimes they race as a team, and sometimes they break off for solitary runs. One thread remains through all members—they are completely committed to the club.

His most recent marathon, completed just a couple of weeks ago with his younger daughter, Jenelle, is one in a long string of marathons he enjoys for the personal challenge. He has run marathons with both daughters (Kendra is WPI ’04 and is married to a WPI alum), and his wife, Sandra, making it a family affair. “I don’t really race marathons; I just do them,” he says. “It shows you have the drive to do something.”

And Stafford’s enthusiasm for WPI can’t be contained. “In the over 20 years I have been traveling with teams, I have detected a particular characteristic of WPI teams,” he says. “I have high expectations for every team I travel with. Our teams know how to actualize designs—they know how to build stuff.” And they can do the essential things necessary for projects so that when things do fall apart or don’t go as planned, they step back, reassess, and tackle the new problem as it’s presented. They don’t throw in the towel because they have a roadblock, he says.

“Maybe we didn’t teach them how to handle this particular problem, but we did teach them how to learn,” he says. Watching students use their flexibility and apply their knowledge is WPI at its best, he says, and something he never tires of watching.